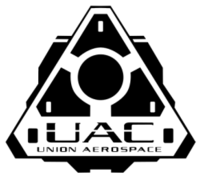 The UAC logo as seen in Doom (2016), combining the rounded block letters of the original logo with the circle-in-triangle design of the Doom 3 logo.

Advancement through the tiers came to require arcane initiation rituals, branding with demonic tattoos, and the acceptance of experimental augmentations. Dissent was stifled wherever it was found and employees were encouraged to report co-workers who questioned the UAC's ideology to security staff for "re-education". At the highest ranks, the cult promised its followers power beyond mortal imagination in exchange for absolute loyalty to Pierce and her demonic masters.

The UAC in Doom Eternal[edit]

Following the return of Samuel Hayden to Earth, the UAC split into two rival factions.

Samuel Hayden's faction of the UAC merged with the remains of the world's governments as the Armored Response Coalition, which now acts as the primary military force of the remaining humans on Earth using advanced technology designed by Hayden. Despite their best efforts, they are fighting a losing battle, Hayden being badly damaged before the arrival of the Doom Slayer.

The elements of the UAC still loyal to Olivia Pierce's cult came under the influence of the Hell priest Deag Ranak, promising its employees immortality and endless power if they would aid in the sacrifice of Earth to Hell. The UAC cultists have since expanded the production of cybernetically modified demons and improved on the design of their prior creations. Their holographic messages now consist entirely of Hellish propaganda declaring the consumption of Earth to be part of their "brighter tomorrow" and urging the rest of humanity to submit to the "mortally challenged" as they have. Not all employees in the UAC are corrupted, though, as evidenced by the incredulity of the workers on the BFG 10000 installation when told that their corporate higher ups want them to let the demons enter the station.

The UAC has a role in the 2005 Doom movie as well, but their ambitions and scientific work deviate somewhat from those in the games, as they focus on genomic research, even though teleportation is also used as a form of transportation between Earth and Mars. It should be noted, however, that genomic research was mentioned in Doom 3. The genomic research in the movie focuses on a 24th chromosome which makes humans exceptionally strong and enduring and enhances or exacerbates their moral inclinations. In the movie the UAC operates on Mars and the brunt of the action takes place in the "Olduvai Research Station".