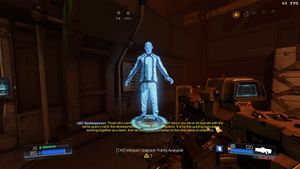 The UAC Spokesperson is a holographic character (and occasionally its disembodied voice alone) who appears in various locations throughout the UAC Mars Base in Doom (2016). Upon approach to specific areas, the character or its voice will activate and play back pre-recorded messages usually dealing with UAC policies and procedures, expectations or encouragements for advocates, or greetings to visitors.

As one approaches areas of the base restricted to higher-tier advocates, the messages begin to be less ordinary and more blatantly revealing of the UAC's occult bent. This culminates in an instance of the hologram found in the Lazarus Labs which delivers its message entirely in a demonic tongue.

The spokesperson's voice is similar in sound to that of VEGA, though no other connection between the spokesperson and VEGA is explicitly suggested by the game.

A second UAC Spokesperson, this one female, appears in various locations in Doom Eternal through a similar set of holographic messages. The messages at this point have abandoned all pretense of hiding the UAC's connections to Hell, openly calling for humanity to surrender to the demonic invaders and declaring the very existence of the Doom Slayer to be nothing more than a myth of the "non-believers".