No beer and no tv make Homer go crazy 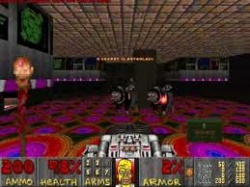 The Ultimate Simpsons Doom is a graphics and sound modification created by Myk Friedman and Walter Stabosz where the player takes the role of cartoon character Homer Simpson, killing his friends and family which replace the monsters. Since it only replaces graphics and sounds, it can be used with either Doom or Doom II.

The wad contains a SNDINFO lump which remaps some sounds for source ports such as ZDoom and the Eternity Engine which support it. The original vanilla engines and source ports which do not support this lump will play the mod without remapped sounds.

The following characters from The Simpsons take the place of the corresponding monster: