Umbra of Fate is a single-level PK3 for Doom II using the GZDoom source port that came out in May 2018. It was designed by Alexa Jones-Gonzales (Remilia Scarlet) and uses custom music tracks by Remilia Scarlet. It was chosen as one of the runners-up at the Cacowards in 2018.

Umbra of Fate includes several new or modified weapons and an extensive roster of custom monsters and other objects. 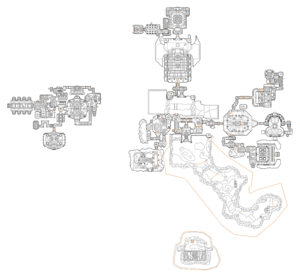 Map of Umbra of Fate
Letters in italics refer to marked spots on the map. Sector, thing, and linedef numbers in boldface are secrets which count toward the end-of-level tally.