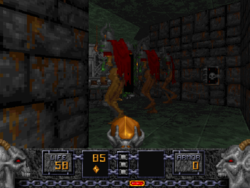 Undead warriors lurk in a secret area in E1M2: The Dungeons. 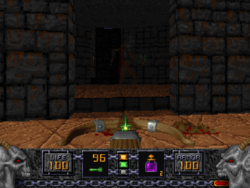 Ghost version of the undead warrior found in the end of E1M3: The Gatehouse.

The undead warrior is an enemy in Heretic. They are tall skeletons in armor with horned helmets and red capes. When attacking from a distance, they throw green enchanted axes. At close range, they slash with their axe.

Description from the manual: As part of the Order's insidious plot to control your world, they've recruited the dead, gave them armour and armed them with deadly magic axes. Now they guard the evil cities and toss their infinite supply of axes at any elf who passes by.

Arguably the "jack of all trades, master of none" foe in Heretic. The undead warrior is fairly fast moving, but not as fast as a sabreclaw and fairly healthy, but not as much as an ophidian. It attacks by throwing a pair of axes in succession at the player. Most of the time it throws green axes, which deal medium damage, but occasionally it will throw a more powerful red axe. There is no way to tell whether it is going to throw a green or red axe, though the red has a probability of approximately 13.9%, or slightly more than one in eight axes if vanilla RNG is used (with evenly distributed random numbers the chance would be 15.625%).

The thrown axes of both colors will go through ghost enemies. This allows the player to use a Shadowsphere to become immune to the thrown axes, and possibly assist in provoking infighting by allowing the axes to pass through and strike enemies on the other side of the player. Green axes are affected by the push of wind but red axes are not.

The undead warrior can also slice its opponents with its axe in melee. The Shadowsphere power does not protect against this attack.

However the normal undead warrior is not immune to axes thrown by the undead warrior ghost and will retaliate against its ghost counterpart if accidentally struck by it. Such fights are usually extremely one-sided as the only way an undead warrior can harm a ghost is with its melee attack.

In the IWADs the undead warrior is first encountered on these maps per skill level:

The IWADs contain the following numbers of undead warriors per skill level:

The undead warrior ghost is first encountered on these maps:

The IWADs contain the following numbers of undead warrior ghosts: