Under Neith is a single-player map for Doom, requiring a limit removing source port. The map was created by Owen "Sarge Baldy" Lloyd and features textures by Nick "NiGHTMARE" Baker as well as the level's author. It was released on 24 January 2005, and is the sequel to Neith.

As the title suggests, the map takes place under the surface of the imaginary moon Neith, and as a result it is darker atmospherically than its prequel. Though the map follows Neith in making use of the berserk pack, it does so to a somewhat lesser extent. The map structure is also far less linear. Though some found this made the map too mazy, it was nevertheless well-received, winning "wad of the week" honors in The /newstuff Chronicles #218[1] as well as being the first map to receive Darren Finch (Doom Dude)'s Level of the Day accolade[2]. 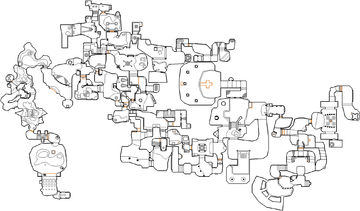 Map of Under Neith
Letters in italics refer to marked spots on the map. Sector numbers in boldface are secrets which count toward the end-of-level tally.

* The vertex count without the effect of node building is 9882.