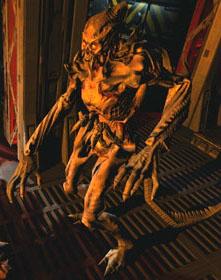 Multiple unfinished concepts for Doom 3 monsters were cut during the design process and did not make it into the finished game. Various concept designs of these monsters were shown among pre-release Doom 3 promotional materials. Eventually, some of the unfinished monsters were finished and used in the Doom 3 expansion, Resurrection of Evil.

The original concept for the arch-vile, seen in the December 2002 issue of PC Gamer, initially went unused in the final game. It was eventually recycled as the model for the vulgar in the Resurrection of Evil expansion pack. Differences from its use as the vulgar included an upright walking posture and orange glowing eyes. 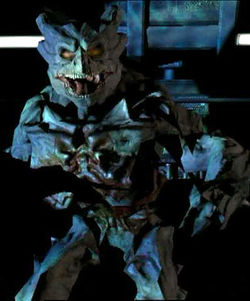 The monster popularly known as "birdman" or "birdie."

The birdman (a community-applied name for the monster, due to perceived bird-like features of its face) was displayed in the Macworld 2001 id Tech 4 demo presented by John Carmack.[1] According to Twitter posts by artist and character designer Kenneth Scott, this character was originally intended to be the baron of Hell,[2][3] but ultimately ended up as a "failed prototype" for the artstyle and workflow used for the monsters that survived into the final game.[4]

A full concept was created for the spiderdemon, which might have also doubled as an arachnotron. Neither monster was in the final game, however, with the spider-based theme being carried on instead by the trite, tick, and vagary, in a more purely organic style. The arachnotron was later realized in the Doom 3: Phobos modification.

In the Limited Collector's Edition version of Doom 3 for the first-generation Xbox, a concept art gallery is included as an extra. Featured in the gallery is an entire section dedicated to unused monsters and characters. Little is known about the original purposes of the cut characters however.