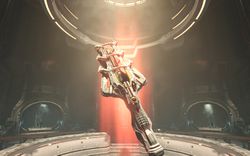 The Unmaykr being unlocked on the Fortress of Doom.

The Unmaykr is a mysterious secretive weapon revealed to be a feature of Doom Eternal in the January 21, 2020 press event. Found in a central location of the Fortress of Doom, the Doom Slayer's space station, the Unmaykr requires all six of the Empyrean Keys to be found before it can be unlocked. Each Empyrean Key is earned by completing one of the six Slayer Gate challenges dispersed through the game's levels. It is the last main weapon to be introduced in Doom Eternal, with the potential to be unlocked after clearing Taras Nabad (the earliest possible time that all Empyrean Keys can be found).

The name of the Unmaykr is simultaneously a reference to the Maykrs and to the Unmaker, the secret weapon from Doom 64 which was originally given this name by the Doom community via analogy with a similar concept in Tom Hall's Doom Bible. In addition, the weapon's appearance and function is similar to its forerunner, with a red glowing core inside its center and its firing of three energy blasts in a spread. Its method of being unlocked via finding key artifacts is also reminiscent of the Unmaker's reliance on the Demon Keys.

The Unmaykr is a full-auto rapid-fire weapon that launches three energy orbs per shot in a diverging horizontal spread. The first shot fires the orbs in a tight spread, with subsequent shots spreading gradually wider until the third shot, after which the following shot will reset into the narrow spread to repeat the cycle. The weapon shares its ammo pool with the BFG-9000, with one unit of ammo providing 30 shots. When acquired, it shares its slot on the weapon wheel with the BFG-9000 and can be swapped with it at any time.

It is highly effective at close to medium range, especially against large targets and clustered enemy groups. Despite this, each individual orb does not have the sheer stopping power of the BFG-9000 and the spread makes it unreliable against fast-moving enemies (especially if they can also fly). Additionally, despite consuming less ammo per shot than the BFG its high fire rate can still cause it to deplete ammo quickly.

It is effective against the Doom hunter's first phase. The Unmaykr can quickly destroy its sled.

The Maykrs built the Unmaykr after being inspired by Night Sentinel technology. When activated, shutter ports open and fire tri-directional bolts of condensed Argent energy. When it is acquired, Samuel Hayden comments that its sheer destructive potential is "staggering".

The Unmaykr had been confused with the Crucible blade due to statements by press that the weapons are one and the same, but analysis of footage indicated that the weapons bear entirely distinct designs.