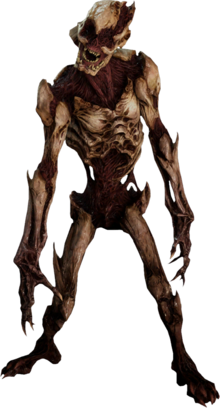 The unwilling are a type of zombie which occurs mostly in Hell in the 2016 Doom. They are stated to be Hell slaves and are forced to labor for the demons. They are the remnants of civilizations absorbed by Hell, being the final form taken on by possessed who are brought there, and according to the game's lore, they built most of the structures that can be found on that plane. They are sometimes spawned by a summoner, even outside of Hell. The unwilling is similar to the bony zombie from Doom 3. Like the weakest forms of the possessed, they can quickly be stunned for a glory kill with a melee weapon bash.

They may engage in combat with imps.

Attack of the Unwilling, a screenshot released by Bethesda after E3 2015.

In the wake of Bethesda's E3 2015 presentation, a screenshot was released collectively calling the zombies which had been seen in the game "The Unwilling." This was later changed so that most are referred to instead as "possessed," while the name "unwilling" was reassigned to the specific type of zombie that occurs in Hell.