For information about the Spectre enemy from Strife, see Spectre (Strife). 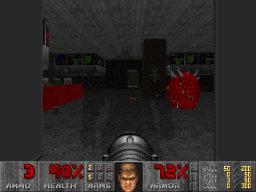 A spectre about to bite the player in Doom II MAP08: Tricks and Traps.

Spectres are the partially invisible counterparts of demons. Except for their fuzzy, blurred appearance, they are exactly the same in behavior and attributes, and thus may be thought of as demons who have a permanent partial invisibility power. They usually hide in darkened areas, waiting to startle players. Spectres do not have frames of their own, as the Doom engine uses the same information used for demons to account for them, which means the monsters share sprites.

Spectres appear as "shimmering" beings, like a lens which distorts and reflects the area seen through their translucent bodies, making them hard to spot in darker areas or against certain textures, such as grey speckled walls. However, in bright areas, they are noticeably visible and "spotty".

In the Doom II manual, their description is: Great. Just what you needed. An invisible (nearly) monster.

The PlayStation version, aside from featuring ordinary spectres at both 25% and 100% additive translucency levels, introduced a stronger version of the spectre called the nightmare spectre.

In classic Doom, the spectre is first encountered on these maps:

The IWADs contain the following numbers of spectres: