I am Quasar, also known as James Haley. If you are reading this anywhere other than on the real Doom Wiki at DoomWiki.org, then you are on the wrong site, and you are looking at an outdated page. I am the organizer of Team Eternity, and a principal author of the Eternity Engine and WinMBF source ports. Programming is my main occupation, particularly for source ports, and so I tend to stick like glue to highly technical issues. Don't be surprised if you see me posting bits and pieces of the code in order to make a point. In real life, I am a fulltime game developer for Nightdive Studios, while doing part-time software engineering and systems integration in the health care field on the side. 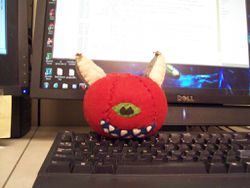 I kept telling her that chewing on the keyboard isn't how you type on IRC. Oh well.

I previously held Hissy, proving the legitimacy of DoomWiki.org as the one true wiki! We are still plotting the total domination of the Doom community, and then the world itself. Beware, all would-bes and pretenders to the throne. She will suffer no rivals.

From January to September of 2011 I was intimately involved in the process of exporting this wiki from its original hosting arrangement to its new home on MancuNET. I am an admin and bureaucrat user (via SpiderMastermind), so ask me if you need help with something.

Here are my contributions to the wiki:

And here are my main interests, consisting of articles I have created or significantly rewritten/contributed to:

As of late my main focus has been on attempting to improve this site's SEO, through a general increase in article quality, differentiation of content against our parent source, and also with a variety of backend efforts including support for OpenSearch, getting good meta keyword and description tags in place, addition of custom code to generate <link rel="canonical"> tags, addition of strategic links between pages with high hits or that will show up in response to specific search engine queries, sitemap generation, deployment of Google Webmaster tools, and resolution of ongoing issues with a lack of 301 redirects between our registered domain names causing duplicate content penalties.

manc and I have upgraded the installation to the latest versions of MediaWiki as of 2014-04-20, and all of our active extensions. We are now running on the newest stable release 1.22.5. Other changes and improvements were made in the process:

I am a moderator of the Source Ports and Eternity Engine forums on Doomworld.

Amongst the work I have done on Eternity are several things that were, at the time, technological breakthroughs for the Doom engine:

In September 2008, our long-running effort to see the Heretic & Hexen source code rereleased under the GPL was successful. Thanks to Raven Software and in particular, James Monroe, for seeing the re-release through.

As of February 2011, my joint project with Kaiser to reverse engineer Strife and reconstruct its source code with the maximum possible fidelity to the lost original has come to fruition in the form of two beta releases of Chocolate Strife, the latter of which boasts at least partial demo compatibility with the original executable. An official release is also available now along with Chocolate Doom v2.0.0.

In something of a dream come true, I was asked in August of 2014 to work on the release of Strife: Veteran Edition by Nightdive Studios, together with Kaiser. Over the next four months, we turned Chocolate Strife upside down in order to create a new remastered version of the game using Kaiser's Kex engine code. I mainly focused on bug fixes, limit removal, new gameplay features like Capture the Chalice and the dynamic automap markers, the extensive frontend menu system, and Steam integration, particularly for the multiplayer component. I am also the one who got to fix all the missing textures and open sectors in the original maps to make them GL friendly.

Between 2016 and 2017 I worked on a backport of the Atari Jaguar version of Doom to PC called Calico. My primary motivation was that no one had ever done anything interesting with the source code for this version of Doom since it had been released. A secondary motivation was that it would lead to a better understanding of the other console versions that are based on it, including the 32X, Game Boy Advance, PlayStation, and Sega Saturn ports, as well as Doom 64.