Hi - Thanks for your work on the doom64 articles. One question: are you doom64 screenshots from doom64 or from the doom64 TC? It looks like they're running in a GL port, forgive me if I'm wrong. I think it would be best to have real doom64 shots if that is the case, even if the TC is very similar. -- User:Jdowland (who should log in more) 17:28, 8 Nov 2005 (UTC)

The screens are from the TC: It's much eaiser to grab good screens from (Bind a key to Screenshot and press it when necessary: Still hard to get good in-game shots for the Mother Demon, though) -TDA

Bleh, I really really don't mean to argue, but are absolutely sure you're looking at a clean EXE when you say the Spiderdemon uses a chain shotgun? I just loaded up a clean vanilla EXE of Doom 2 and went to Nirvana. The Spiderdemon was only shooting a single bullet at me/the Cyberdemon/whatever its current target was. I know the sound it makes is the shotgun sound, but unless there are multiple bullets per firing frame hitting the exact same place in a way that it looks like a single shot, I stand by my assumption it's a normal chaingun she shoots. >.>

Also, from the Doom source:

You're correct on the chaingun guy, though. His attack codepointer fires one bullet.

I didn't say the sergeant was much stronger than the trooper.  I said he was somewhat stronger.  (This is Doom, not Berzerk — most features are continuous, not binary.)  Your version is also correct, but contains less information.    Ryan W 22:44, 26 January 2006 (UTC)

Er… I don’t like that someone touches my user page, and without warning me in my talk page. I put this image here just for fun. If someone find it offensive, he can go elsewhere next time. Impse is in the mythology of Doom and should not be censored like this. Ducon 11:39, 29 January 2006 (UTC)

in the mythology of Doom? Rubbish! To suggest it has as much credability as anything else on this wiki is preposterous. It's a pathetic, purile joke and I would be offended to stumble across it by accident. As it stands it is embarrassing to be associated with it. (But I don't have any objection if someone really wants it on their user page.) -- Jdowland 13:23, 29 January 2006 (UTC)

Talk:List of analogies between Wolf3D and Doom II's secret levels[edit]

No response to your objections after more than a week.  I say we dump the article and both of its categories (which are otherwise empty).  I will make sure the information gets into MAP31, MAP32, and Wolfenstein 3D.    Ryan W 15:09, 13 April 2006 (UTC)

I've stuck the deletion template on the page (which I should've done earlier) so I'll wait for the outcome of any extra opinions caused by it. -- TheDarkArchon 15:56, 13 April 2006 (UTC)

He is the fastest monster in Doom II, being almost one and a half times faster than the Cyberdemon.  In that case, the data tables in the individual monster articles are wrong — according to them, the arch-vile moves at a speed of 15, while the cyberdemon moves at 16.  Would you mind looking into that?    Ryan W 19:26, 14 April 2006 (UTC)

Projectiles speed is consistant (I.E Their movement isn't reliant on a codepointer call) so there's no need for a "real ingame value" -- TheDarkArchon 22:44, 14 April 2006 (UTC)

I'm not so sure about that.  According to DeHackEd, rockets travel at a speed of 20.  20 what?  20 units per tic?  20*64 units per second?  20 times as fast as the slowest permissible value?  Even if there's a simple conversion, we were kind enough to our readers to translate pain chances into percentages, so I think we should do the same thing in this case.    Ryan W 06:56, 15 September 2006 (UTC)

No, wait a minute.  That thread is about moving floors, not projectiles.  If a rocket obeyed this rule, it would move at 87.5 units/second, which is clearly ridiculous.  This page suggests that it is actually units/tic.    Ryan W 12:45, 4 November 2006 (UTC)

A note: The difference between A_VileChase and A_Chase is that A_VileChase checks for corpses so that the Archvile may resurrect them on contact. -- TheDarkArchon 19:38, 14 April 2006 (UTC)

It wasn't seperate from "give *". The only difference was * was "staminaupgrade": If there was a sub part for every variation of give, then the article would be even bigger which was part of the reason the article was vfd in the first place. -- TheDarkArchon 20:45, 26 April 2006 (UTC)

Hmm, good point.  But the availability of powerups across different games seems like a non-trivial fact which should be noted there.    Ryan W 21:24, 26 April 2006 (UTC)

Fair play. I'll add something on the give section.

If I remember correctly, that wasn't on the talk page.  The person erased the article before we had voted to delete it.  Whether I agree with their opinion or not, that's vandalism and should be reverted.    Ryan W 21:39, 13 July 2006 (UTC)

Mostly uselessness when it came to the damages in the individual monster articles (In the case of the Wolfenstein SS, it was completely innaccurate). As for the edit to monsters, the damage thing should be placed in it's own article, since it affects both weapons and monsters. -- TheDarkArchon 10:51, 18 August 2006 (UTC)

I think the point of that edit (though written very awkwardly) was NPOV, as in: "Although the word 'clip' is almost universally used, in gaming and non-gaming contexts, to refer to both clips and magazines, the items in Doom are technically magazines because of such-and-such."  Then again, the incorrect usage may be sufficiently established in popular culture that it needn't be mentioned here.    Ryan W 16:39, 5 September 2006 (UTC)

The reason I reverted it was not for POV reasons. It was because it was missing the point that the article that was linked to was making. -- TheDarkArchon 16:43, 5 September 2006 (UTC)

I'm a bit concerned that you are too quick to revert other people's edits.

In this edit, you did not give any reason for the revert. As an editor, it can be easy to take a revert personally, especially without an explanation of what the editor has done wrong. Not all anonymous editors are vandals or spam-bots, and we wish to encourage as many people to get involved with the wiki as possible.

In the case of that edit, you incorrectly believed that the line that was added repeated the information already in the article. What concerns me is that when I un-reverted the edit, you did not pause to read the edit more thoroughly before re-reverting. If you take a closer look, the cheat-code for the FPS counter is not the same as the general cheat-code.

Please take the time to politely explain your rationale for a revert when you perform one, and pay particular attention to the content if someone appears to disagree that a revert is necessary. 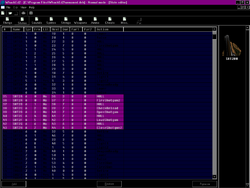 Hmm, DeHackEd#Player code pointers says the same (and its history page includes at least three people who know WAY, WAY MORE about this stuff than I do).  So I think I am going to accept it as true for the time being.    Ryan W 04:58, 5 November 2006 (UTC)