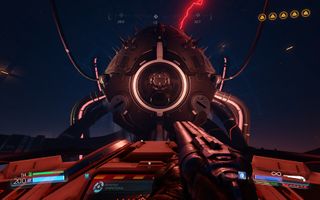 VEGA is an artificial intelligence which appears in Doom (2016) and Doom Eternal, which was originally created by Dr. Samuel Hayden to administrate the day-to-day functions of the UAC Mars Base as well as the production of Argent energy. It is cooperative with Hayden in assisting the Doom marine in his missions.

VEGA was originally housed in the VEGA Central Processing facility, built on Mars' polar ice cap to keep it away from prying eyes and to aid in cooling its superheated core. Just before VEGA's destruction towards the end of Doom (2016), the Doom marine makes a backup copy of it; it is later integrated into the Fortress of Doom prior to the events of Doom Eternal and continues to assist the marine from that location.

VEGA was designed by Samuel Hayden in response to the UAC's determination that administration of the flow of Argent energy and the day-to-day operations of the UAC Mars Base facility would require an unprecedented amount of computational resources. VEGA is stated to be the first fully autonomous artificial intelligence. The system's male gender, 50-year-old apparent age, and colloquial speech patterns were initially assigned to give the system an affable disposition and to make interacting with it a pleasant experience. The system is largely self-taught, and was given free roam over all UAC computer systems to gather initial information for its learning process. After this, it took effective control of all of those systems.

VEGA is powered by unrefined Argent plasma, and has an operating temperature in excess of 1.2 megakelvins - hotter than the surface of the Sun. It also incorporates proprietary, top-secret UAC technologies, and is additionally rumored to contain a component of arcane technology found near the Argent Fracture. As part of its work, VEGA did significant research into Argent energy itself, devising more efficient processing and research methods, and designing both the Argent cache and Argent accumulator storage devices.

"VEGA" is stated to be an acronym, but Samuel Hayden has never revealed the actual meaning of the letters.

Shortly after the Doom marine's awakening, VEGA performs a diagnostic on his Praetor suit and enables some latent functionality that allows the marine to upgrade his arsenal at an accelerated pace through optional challenges and combat efficiency. VEGA also supports Dr. Hayden and the marine by analyzing the status of the facility, monitoring the location of Olivia Pierce as she carries an Argent accumulator up the Argent Energy Tower, accessing Olivia's files to provide information to the marine about the Lazarus facility, and studying the marine's interactions with the Helix Stone to determine the location of the Crucible.

After the marine recovers the Crucible and is tethered back to Mars, it is determined that another Hell-jump will be required to transport the marine to The Well so it can be closed down. As the Argent Energy Tower has been destroyed and there are no Argent accumulators available, it is determined that the best course of action is to destroy VEGA; the collapse of its Argent plasma core would create the needed rift. Since VEGA is incapable of self-termination, the marine is requested to complete the shutdown process.

Before VEGA is destroyed, however, the marine opts to make a backup of the AI's systems, which he stores on a Praetor token and keeps with him. It is unclear if Dr. Hayden is aware of the backup's existence, as he states in the end that VEGA has been lost. It is also notable that during the final conversation with Dr. Hayden during the backup process, VEGA states that it has "many regrets," in a low distorted voice that is nearly unintelligible; this could possibly indicate that the machine is not in agreement with Hayden's plans to manipulate and betray the Doom marine.

At some point prior to the events of Doom Eternal, VEGA was integrated into the Fortress of Doom. As well as monitoring the fortress' systems, a connection between it and the Praetor suit allows VEGA to provide the Doom Slayer with insights and analysis into the environments and events going on in various areas. When the Slayer must travel to Nekravol in order to use its soul spire to reach Urdak, Dr. Hayden advises that VEGA will be able to create an exit portal for the Slayer once his mission is complete; VEGA is then transferred to an external storage device which the Slayer takes with him.

VEGA is plugged into Urdak's teleporter control system so as to allow the Slayer to return to Earth; however, this process seems to merge him with the Father of the Maykrs and so he seemingly remains on Urdak. It is possible (and indeed VEGA itself openly asks if this is the case as its voice noticeably changes) that VEGA may have always been the Father, or built from his missing essence; the truth is not made clear as Hayden does not answer when VEGA asks if it is the Father.

The Ancient Gods, Part One ultimately confirms that VEGA and the Father are indeed the same being. After the Father commanded Samur Maykr to descend into the Earthly realms to guide humanity through their impending discovery of Argent energy, the Seraph departed his Maykr body and inhabited a cloned human, becoming Samuel Hayden. In order to allow the Father to assist in his duty, Samuel transformed the remaining consciousness of the deity into the AI VEGA. This transformation left VEGA without any knowledge of its true identity, but allowed the Father to remain hidden from the Nameless One, who endlessly seeks to absorb his creator's powers.