Valhalla is a map by Edward Cripps (Ed), released in 2010. It has a dark, industrial theme which reminded some reviewers of Doom 64. The map received a Cacoward at year's end. 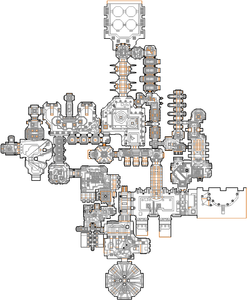 Map of Valhalla
Letters in italics refer to marked spots on the map. Sector, thing, and linedef numbers in boldface are secrets which count toward the end-of-level tally.

Seven of the monsters (with varying difficulty settings) in one of the monster ambush teleporter rooms (sector 3757) have the Ambush/Deaf flag, making 100% kills impossible.

* The vertex count without the effect of node building is 24203.