Vanilla Sky is a single-level PWAD for Doom II, meant for limit-removing source ports that was released on 1 July 2013. It was created by DooMknight and uses the music track "". This map was created as part of the 12th Cabro's Map Tournament from Arcades3d.com, with the rules being to stick to the classic Doom mapping format and avoid the use of any custom textures.

Vanilla Sky is set in an extremely large city, similarly to DooMknight's previous map Europe released in 2005. It uses vanilla textures in very creative ways, notably with the creation of vehicles through sector detail. DooMknight would go on to release one more similarly massive map in 2018, UAC Invasion: The Supply Depot, which won one of the 25th annual Cacowards. 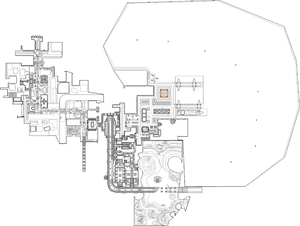 Map of Vanilla Sky
Letters in italics refer to marked spots on the map. Sector, thing, and linedef numbers in boldface are secrets which count toward the end-of-level tally.

The (absence of) data was last verified in its entirety on November 28, 2021.

* The vertex count without the effect of node building is 49820.