Vaporware Demo is a partial conversion with one single player level titled "Cargo Transfer" for Eternity Engine by Sarah Mancuso (esselfortium). The project was announced on July 9, 2009 as an "ambitious map pack" by a team of experienced Doom community members.[1] Its one level preview demo was released on May 1, 2011 to coincide with source port Eternity Engine v3.40.11 required by the PWAD.[2][3] A v1.01 bug fix release followed on December 6 to remove an improperly tagged secret area.[4] The par time defined in EMAPINFO is 7:30.

Despite being a short preview of an in-development project, Cacowards 2011 named Vaporware Demo as one of its annual winners. Feature writer Ryan Nematollahi (hobbs) called the WAD, "one of the best single map levels ever".[5] Although the demo had an overwhelmingly positive reception, the Vaporware map pack was never completed. However some prospective team members did contribute to 2012's Back to Saturn X: Episode 1 megawad whose development was led by esselfortium. It explored similar tech base themes within design restrictions of the vanilla Doom engine.

The map theme is an industrial tech base that uses custom textures extending the base materials of Knee-Deep in the Dead. It uses a modified palette that desaturates the blue color range for a worn-down aesthetic. Building interiors showcase environment effects including translucent steam and humming computer panels.

The level also acted as a tech demo for features added to Eternity Engine including ACS, EDF, slopes, and ambient sounds. Polyobjects are used for horizontal sliding doors with a see-through window. Vaporware is the earliest WAD to make extensive use of complex portals to accomplish multi-story room over room effects and floor reflections.

The WAD contains custom OGG music written by esselfortium for the title screen and MAP01.

There is also an additional unused enemy "Crazy suicide bomber" with EDF behavior under sprite lumps BMBE* and thing type 22099. It is likely this enemy was planned for future levels. 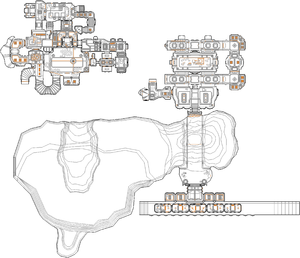 Map of Vaporware Demo
Letters in italics refer to marked spots on the map. Sector, thing, and linedef numbers in boldface are secrets which count toward the end-of-level tally.

* The vertex count without the effect of node building is 26144.