Venom is a single-level PWAD for Doom II that came out in 1998. Its author is Ola Björling and it was chosen as one of that year's luminaries in the Top 100 WADs of All Time. 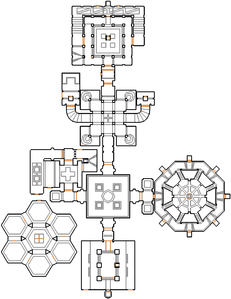 Map of Venom
Letters in italics refer to marked spots on the map. Sector, thing, and linedef numbers in boldface are secrets which count toward the end-of-level tally.

Open the demon face in front of you and head north, then visit the two small rooms to the west and east, pressing the lion switch inside each one. This will open the bars to the north, allowing you access to an elevator that will take you down into a room built of brown bricks. Press the lion switch in the middle of this room to open the walls, revealing small doors to the east and west. They will both take you to the upper level, where two sets of bars block the way to the very center. Press one of the gargoyle switches to lower the set of bars on the other side, then make your way to the center. Turn south, then run across the gap to make your way to the column with the satyr switch. Press it to reveal a gargoyle switch, which will open an area to the east of the starting room.

Go back to the starting point and enter the newly opened eastern passage, opening the baron face wall. Enter the door, head downstairs to the center of the octagonal room and press the lion switch here. This reveals a gargoyle switch on the central column, which will open an area west of the starting room.

Go back to the starting point and enter the western passage, opening the demon face wall. Enter the door. In the next room, press the skull switch and enter the revealed passage. Press the skull switches on either side of the window to open the bars and the door, then quickly make your way there before the door closes. Go to the end of the passage and press the lion switch. This will open the walls, revealing a new lion switch. Press it to open the final, southern passage in the starting room.

Return to the starting room and enter the southern door. Drop down into the outdoor area and press the lion switch to the southwest, raising a bridge to the teleporter (this bridge can be lowered from below like a lift.) You can also activate the southeastern switch to raise another bridge to the north, but it's not necessary. Enter the teleporter (if it is blocked by metal pillars, step onto the central platform to open them.)

In the final area, you need to press the satyr faces on the walls to open new rooms. Make your way clockwise around the area until you return to the first chamber, where a lion switch will be revealed. Press it to open the central area, then enter the exit pad.

A demon (Thing 191) has no flags set for any of the three difficulty classes, so it does not actually appear in the level.

In the northernmost part of the map (brown brick room), the satyr switch on the northern side of the central column, and the gargoyle switch behind it, can both be activated from the ground level. This allows the player to skip a large part of that room.

* The vertex count without the effect of node building is 2237.