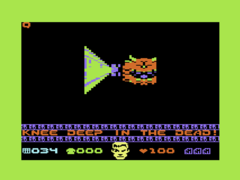 A cacodemon attacks in vicdoom.

Though based to a small degree on the Linux Doom source code, the game engine is heavily simplified and customized, and is largely written in 6502 assembly code. The end result is a game closer to Wolfenstein 3D in terms of technology, albeit capable of rendering arbitrarily angled walls, with an engine still based on sectors rather than fixed grid cells.

Simplified versions of Doom's shareware resources in formats that can be dealt with by the VIC are baked into the executable file as objects. This includes support for the soundtrack and converted versions of the PC speaker sound effects.

The automap is supported, and cheat codes are available.

Eight of the nine levels of Knee-Deep in the Dead are provided, in a simplified format. Many superfluous areas are removed to fit the levels into system memory constraints, and all height differences are removed as the game engine is not capable of dealing with them. 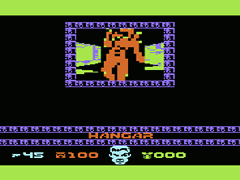 Versions of several of Doom's monsters are provided with simplified AI based loosely on the original code. In addition, exploding barrels are implemented.

All shareware weapons are implemented except for the rocket launcher.