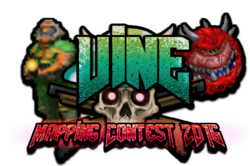 The Vine Mapping Contest 2016 was an event organized by Joel "Vargskelethor" Johannson of the Vinesauce streaming team. The terms were simple: make a WAD with up to three maps, playable in ZDoom or GZDoom. It was followed two years later by Doom Mapping Contest II: Hellectric Boogaloo.

A total of 145 entries were accepted.