Void and Rainbow is a single-level PK3 for Doom II requiring the GZDoom source port with OpenGL enabled. It was designed by Serious_MOod and uses the music track by "Illusion" by Akira OST. It also includes a small, non-playable epilogue MAP02 titled "The End" using the music track "Memory" by Angel Beats OST.

Void and Rainbow was initially released on October 31, 2017 and received one of the 24th Cacowards that same year. It was also featured in Doomworld's Top 100 Most Memorable Maps, placing 92nd. 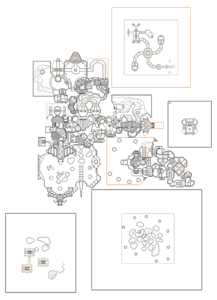 Map of Void and Rainbow
Letters in italics refer to marked spots on the map. Sector, thing, and linedef numbers in boldface are secrets which count toward the end-of-level tally.

In GZDoom versions later than 3.2.0, the lighting does not work correctly.