Wasteland: Sands of Death is a single-level PWAD for Doom that was released in 1994. It was designed by Alberto Barsella and is the third map in his brief Wasteland series. 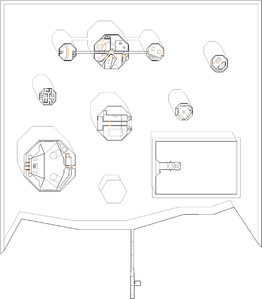 Map of Wasteland: Sands of Death
Letters in italics refer to marked spots on the map. Sector numbers in boldface are secrets which count toward the end-of-level tally.

The lift in front of the yellow door can only be lowered and raised once, so if you ascend without the yellow key, or leave the area without pressing the switch that opens up the blue key area, you will be unable to complete the level.

It is possible to get stuck in the rooms from which secrets #5 and #6 are accessed.