Waterlab GZD is a single-level PK3 for Doom II and the GZDoom source port. It was designed by Nigel Rowand (Enjay) and uses the music track by "Ambience" by James Paddock (Jimmy).

It was initially released on March 19, 2017 and chosen as a runner-up in the 2017 Cacowards ceremony. 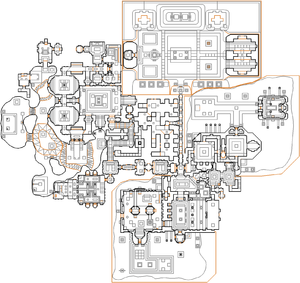 Map of Waterlab GZD
Letters in italics refer to marked spots on the map. Sector, thing, and linedef numbers in boldface are secrets which count toward the end-of-level tally.

* The vertex count without the effect of node building is 9015.