Weapon upgrading is a mechanic in Doom (2016) and Doom Eternal which allows weapons and their mods to receive enhancements such as reduced reload or cool-down times, increased damage output, larger areas of effect, and other improvements. Weapon upgrades for most guns are unlocked for progression by acquiring their corresponding modification (exceptions include the UAC EMG pistol and the super shotgun, which do not accept modifications). The upgrades themselves are then purchased using weapon points, which are earned throughout the game by completing challenges, discovering secrets, and killing enemies.

Once all weapon upgrades have been unlocked for a particular modification or, in the cases of the pistol and super shotgun, for the weapon itself, a weapon mastery becomes available. A mastery is typically unlocked by completing a pre-determined task using that mod or weapon, such as killing a certain number of enemies, sometimes of a particular type or in a required way, such as killing with a headshot, or while the enemy has been stunned by the weapon.

Starting with the Resource Operations level, every level includes three challenges that require the player to kill monsters in a particular manner or find items. Each completed challenge awards one weapon point.

Starting with the Foundry level, up to five weapon points can be earned by killing most or all of the enemies in each level. Progress towards earning these points is represented by the Combat Rating display in the top-right of the screen. 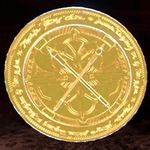 Every level of Doom Eternal (except for Hell on Earth and the Fortress of Doom) awards up to ten weapon points which are represented by pips on the Demonic Corruption meter in the top-right of the screen. For levels that include a Slayer Gate, this is divided into five points for completing standard combat encounters, three points for completing the Slayer Gate encounter, and one point for each of the secret encounters. Where a level does not have a Slayer Gate, the points are divided as follows:

Starting with the Taras Nabad level, rare items called "mastery tokens" can be found that allow the player to bypass a mastery challenge and instantly unlock a mastery upgrade.