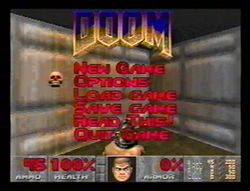 Menu in Doom for WebTV. 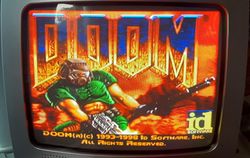 Doom for WebTV was a commercial port of the original Doom to the WebTV internet set-top box. Plans for this port are known to reach back as far as 1998, but along with a few other games developed for WebTV, it was only available publicly for the EchoStar Dishplayer iteration of WebTV hardware in 1999.[1] Though not initially widely known, Doom also had a version made and released for WebTV Plus units, although it was not meant for public release at the time (and apparently remained unreleased, officially).

Hackers discovered the game on an internal section of the WebTV service known as "TestDrive" in late 1998. They were able to download the game at first from a Games settings page on that service and also extracted the download and startup commands, which were then released to the public a year later, apparently on March 28, 1999. However, due to a combination of factors, such as the lack of knowledge and interest about how the targeted WebTV hardware stored data on its hard drive at the time, WebTV Networks, Inc. (WNI) attempting to remotely wipe the WebTV Plus version of the game and other "unauthorized files" from subscribers' units,[2], and the WebTV hacking scene's lack of regard for proper preservation of critical information and content (especially binaries or overall technical information), untampered archives of the game files have been nearly impossible to find. Before 2014, these files did not exist outside of the WebTV service at all.

Doom for WebTV apparently consisted of the shareware version of the game and was made as a demonstration of the WebTV hardware's technological capabilities.

It is currently unknown if Dishplayer users had to download Doom from the WebTV service, but it could be launched on those units by going to the Games tab on TV Home and selecting Doom as the game to launch.

For users using WebTV Plus during the time the game was still available to download, they had to be connected to the TestDrive service first, which was usually done by accessing the Tricks section of the production service (Tricks was a password-locked area with various internal services meant to test the WebTV hardware and service, for which hackers obtained one of the passwords around the same year Doom for WebTV Plus was discovered) and downloading a firmware build that was designed to connect to TestDrive. At first, users could simply go to a Games settings page on TestDrive, download Doom from there, and then launch it through the game's landing page. After the settings page was taken down and the landing page for the game modified to disallow launching it, the WebTV Plus version of Doom could still be downloaded by accessing the WebTV service URL wtv-disk:/content/DownloadScreen.tmpl?diskmap=Doom, and afterwards, the game could be launched with a command in the form of a WebTV-specific URI (i.e., client:boota?partition=DoomROM&size=5242880&source=file://disk/Doom/approm.o).

Availability outside the WebTV service[edit]

Up until 2014, neither the Dishplayer nor the original WebTV Plus versions of Doom were archived outside the WebTV service for the reasons mentioned at the beginning of this page. In 2014, the Dishplayer version of the Doom WebTV port was available for play outside of the WebTV service for the first time by being bundled in a customized version of the WebTV firmware made for Dishplayer and WebTV Plus units released by members of the WebTV hacking scene, known as "HackTV". The binaries for the original EchoStar Doom game itself and the files it loads (doom.wad and webtv.wad) have not been modified, but the game documentation has been modified to bear the HackTV logo in place of the original WebTV logo.

Seven years later, in 2021, it was announced by WebTV hacker MattMan69 on their site, "WebTV MsnTV Secret Pics", that the data for the WebTV Plus version of Doom was found in text files on a 20-year old CD-R backup, which was then used to reassemble the game into a proper format. This also resulted in exclusive releases on the custom "HackTV" build and on a fully fledged WebTV "revival server" operated by scene members, which currently remains private. The release of this version by the scene members is confirmed to have been modified with no regard toward preservation of the original game files, with the splash screens being edited or replaced to show "HackTV" branding in-game.[3]

Closer to proper preservation, copies of the production and debug versions designed for the Dishplayer hardware were released in a dedicated WebTV content archive by an entity that also operates a WebTV-focused wiki that documents primarily technical information on the product and service, which prior to this effort had been largely unavailable. The integrity or completeness of either copy currently archived have not yet been totally confirmed.

Insufficient documentation has been made on differences between Doom for WebTV and the original PC version, but from what has been uncovered recently, the WebTV port offers four episodes to play. Controls are also designed for use with WebTV keyboards, with the arrow keys moving the player, keys 0-9 swapping the weapon, the control key firing the weapon, and space bar for activating objects.