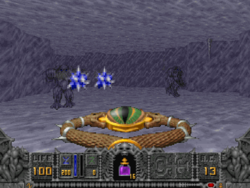 The wendigo is an enemy from Hexen. It appears as a slouched, hulking being of living ice and is typically found in cold environments. The wendigo is one of the more frail creatures in the game, with 120 hit points. As described in the manual:

Wendigos shoot a pair of ice balls, each of which fragment into a ring of smaller shards that are subject to gravity. If the player's health is reduced to 0 and the finishing blow is from a wendigo's ice ball, the player will become frozen solid, then shatter after a short while. Monsters that have freezing death states (all save for the heresiarch and Korax) will likewise suffer this fate when killed by a wendigo. Despite being ice-based monsters, wendigos do not have any elemental strengths or weaknesses; they take full damage from the Mage's Frost Shards and there is no bonus for using fire-based attacks on them.

Wendigos have no pain states at all (they never flinch when they are hit), so ideally they should be killed as quickly as possible. While they are easy to kill, their projectiles can cause heavy damage so it is usually not advisable to engage them at melee range.

In the IWADs the wendigo is first encountered on these maps per skill level:

The IWADs contain the following numbers of wendigos per skill level: