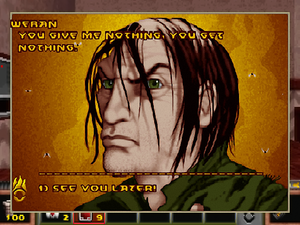 "You give me nothing, you get nothing."

Weran, often referred to by his self-adopted title of Rat King, is a character from Strife. He is the leader of a group of mutant subterranean dwellers who live in the sewers beneath Tarnhill.

One of the missions on which the player must embark during the first third of the game involves convincing Weran to aid the Front. He is needed to provide a route to a hidden access point in the Order's castle so that the player can destroy the shield generators and open up the castle to a frontal assault by Macil's forces. Weran agrees to the task in exchange for a suit of acolyte armor with a respirator, required for his people to scavenge food from above ground. He also helps the player by offering a large quantity of gold, medical kits and environmental suits. As an additional reward for the acolyte's uniform, Weran gives the player the parts to form a flamethrower. Once taken to Irale, the parts can be assembled into a functional weapon.