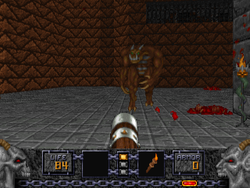 Weredragons are big, half-beast, half-dragon enemies in Heretic. They make their first appearance on E2M1: The Crater. Weredragons, like the player and the gargoyle, can be gibbed if killed by an attack that inflicts significant damage, but because of their high health rating, this is a rare occurrence and can most easily be produced by using a powered-up Firemace.

According to the description in the Heretic manual, the Weredragons infest the darkest lairs of the Order. Possessing all of the strength and agility of a tank, these lumbering creatures belch a body-blasting fireball.

The manual incorrectly states that the player will encounter ghost weredragons. However, this may be a leftover from an earlier build of Heretic. 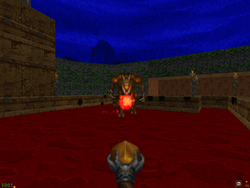 Weredragon attacks the player in E3M6

Weredragons attack the player by spitting out fireballs which inflict 4-32 points of damage and are affected by the push of wind. At melee range the weredragon's breath will do damage directly, with slightly less damage potential.

Their skin colour allows them to blend in somewhat in caves and dark areas. They are stealth in dark areas, because neither themselves nor their projectiles light up.

Although the manual's description may suggest that the weredragon is sluggish and not very mobile, it is actually as fast moving as a sabreclaw, making it the joint fastest opponent in Heretic. They are also very fast to attack, so you need to be very quick to react if you're fighting them at close range.

Among non-boss creatures they have the widest hitbox horizontally, and only the undead warrior's is taller, thus their size can both restrict their movement and make them easier to hit compared to other enemies.

In the IWADs the weredragon is first encountered on these maps per skill level:

The IWADs contain the following numbers of weredragons per skill level: