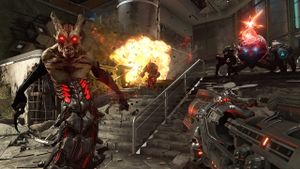 The whiplash is a monster introduced in Doom Eternal. It is a vaguely humanoid demon which has been reduced to its head, arms, and upper torso and attached to a cybernetic serpentine tail. It has multiple means of attack: it has a sharp appendage on the end of its tail and two claw-like blades which are attached to to its arms on extendable chains. The demon has red glowing eyes, two backward-curving goat-like horns, and has an exposed brain.

In addition to attacking directly with the whips, the whiplash can stay them across the ground to release energy waves that can home in on the player's position or attack with its blades if forced into close range. Whiplashes prefer to use hit-and-run tactics against the Doom Slayer; they often take indirect paths at approaching the player to outflank them, attack and then reposition again.

When on the offensive, they prefer to keep their bodies close to the ground to avoid projectiles, so fast-firing hitscan weapons like the heavy cannon are preferable when fighting them. Ice bombs can also be used to great effect, preventing whiplashes from evading attacks. The microwave beam mod from the plasma rifle is also excellent at keeping the whiplash still long enough to use a quick swap weapon combo on it, as the immobilizing effect persists for a few seconds after firing.

The Ancient Gods, Part One introduces a spectral variant of the whiplash which shares the spectre's invisibility and immunity to the rocket launcher's lock-on mod. Like the spectre, ice bombs are effective at both holding it still and making it visible.

The whiplash was discovered by the UAC in the Sanctum Wastelands, and was studied thoroughly due to its agility and the bladed whips concealed within its forearms. UAC researchers created cybernetic augmentations to further boost the lethal nature of the whiplash after succeeding (with great difficulty) in acquiring living specimens.