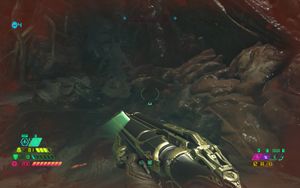 The whiplash spectre is a spectral variant of the whiplash which first occurs in The Ancient Gods, Part One, the first expansion for Doom Eternal, and later appears in the Super Gore Nest Master Level. It is unacknowledged in the game's codex; its canonical name is only visible if one is selected to become an empowered demon. 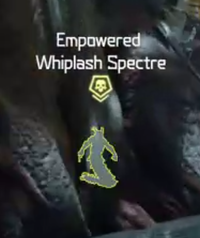 Though mostly identical to the base form of the whiplash, there is an important tactical difference: the whiplash spectre cannot be targeted with the rocket launcher's lock-on modification, a frequent go-to for quickly dispatching the fast-moving whiplash.

Whiplash spectres primarily occur in a heavily fogged area of the Blood Swamps, making them even more difficult to see and likely to escape the player's visual tracking. Freezing the whiplash spectre with the ice bomb carries over as a useful tactic against the ordinary version of the monster and temporarily negates its invisibility as a factor since the ice is always visible.

Should the whiplash spectre be selected to become an empowered demon, it will likewise become more visible due to the glowing gold outline empowered demons possess.