For the port by Bruce Lewis, see WinDoom. 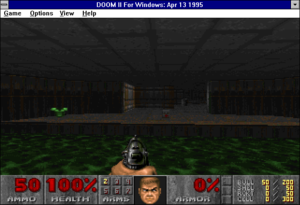 WinDoom was a preliminary port of Doom v1.8 to Microsoft Windows 3.11 by a team initially founded by Gabe Newell, with Robert Hess as the primary engineer,[1] using the newly developed Win32s and WinG technologies. This port never made it past beta testing due to the impending release of Windows 95 and because of performance issues on period hardware.[1] Two beta versions were unofficially released and are available in the /idgames historic archive.

This code base was later upgraded to the full Win32 platform in order to exploit the DirectX technology available on Windows 95, where it became known as Doom95.

Distributed as WINDOOM-.EXE. The title bar simply calls it "WinDOOM".

Distributed as WINDOOM.EXE. The title bar calls it "WinDOOM Build 001".