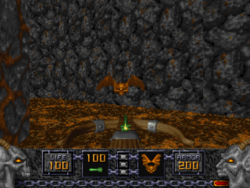 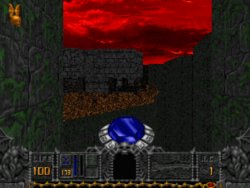 The Inhilicon's Wings of Wrath is an artifact that appears in Heretic and Hexen. It looks like a golden skull with bat wings. Activating Wings of Wrath allows the player to fly. In Heretic, it is a time-limited powerup that lasts for 60 seconds. In Hexen, however, the Wings are reusable until the player exits the current hub; the player can press the Home key to drop to the ground and walk, and subsequently press the "fly up" key to reactivate the Wings and start flying again. While the Wings of Wrath are active, an icon appears in the top corner of the screen which spins while the player is flying and stops spinning when the player drops down and starts walking. In Heretic only, the icon will start blinking when the wings are about to expire.

Unlike other artifacts in both games, the Wings of Wrath may not ordinarily be transferred between levels (except different parts of a single hub, in Hexen). If a player leaves a level in Heretic or a hub in Hexen with a Wings of Wrath artifact, the artifact will usually be lost. For other artifacts, the player can only transport one of each kind between levels in Heretic, and up to the maximum of 25 in Hexen.

In the Heretic IWADs the wings of wrath are first encountered on these maps per skill level:

The Heretic IWADs contain the following numbers of wings of wrath items per skill level:

In the Hexen IWADs the wings of wrath are first encountered on these maps per skill level:

The Hexen IWADs contain the following numbers of wings of wrath items per skill level: