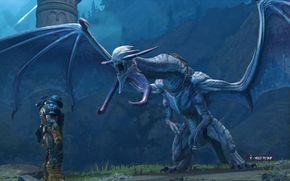 Wintherin are a species of dragon-like creature native to Argent D'Nur which occur in Doom Eternal during The Ancient Gods, Part Two. They are also found in a corrupted form in the depths of Hell's capital, Immora. Natural wintherin have scaly bluish-white skin with purple streaks, two arms and two legs, and two wings, with a total wingspan nearly double the body length. They have four purple horns, with two extruding from the sides of the skull and two from the lower jaw. They have no visible eyes. Their long tail ends in a single barb.

Wintherin were tamed by the Night Sentinels and were portrayed in concept art as accompanying them in battle under the Doom Slayer. The Slayer's own personal wintherin, which bears the Slayer's mark on its forehead, appears at the Torch of Kings near the World Spear after it is lit by the Slayer, whence it bears him what would have been a day's journey on foot in less than a minute of time. Several wintherin appear during the Sentinels' siege of Immora and clash with various demons, including the Titans defending the city. During this battle, they can be seen to fight with blue flame breath and seem completely fearless of any opposition.

Demonic wintherin also appear during the siege of Immora, fighting on the side of the demons. These dragons differ from their Argent-native counterparts by having dark gray and red skin, a row of spines down their back, only a single pair of red glowing horns, and a tail that ends in two barbs.