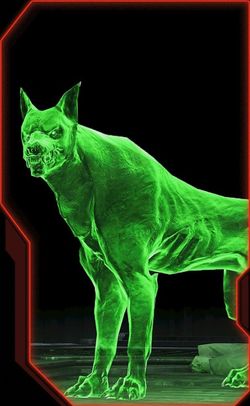 The wolf as it appears in the Codex.

Wolves are a species of animal native to Argent D'Nur which appear in spirit form in Doom Eternal and its expansions. Argenta legends refer to them as loyal creatures that lived as companions of the Night Sentinels; often larger and stronger than others of their kind, they shared instincts with their masters and aided them in battle. The Sentinels never revealed the origin of the wolves, believing that only they stood worthy of them.

A number of green spirit wolves appear around King Novik's castle in Exultia and act as waypoints for the Doom Slayer; when the Slayer approaches, the wolves howl then disappear.

A green wolf also appears in the Forest of the Torch during the Blood Swamps level in The Ancient Gods, Part One, and protects the Slayer from the damaging fog as long as they stay close; the wolf will be absorbed into a number of braziers along the route, forcing the Slayer to fight off waves of demons within a circular safe zone before the wolf moves forward. Two wolves also appear in the World Spear level from Part Two, and will also head towards braziers as soon as they are released from their enclosures.

Marauders in single-player and Battlemode can summon orange wolves to pursue and attack the Slayer; marauders encountered in single-player are particularly likely to summon wolves after absorbing incoming fire with their shields. The Dark Lord will also summon wolves during his boss battle; they drop Sentinel Hammer charges when destroyed, making them the fastest method for charging the Hammer and using it to stun the Dark Lord.