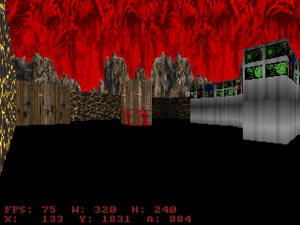 WolfDoom was a early fan made technology demo by Mike Dussault, who would later go on to serve as the Lead Engineer for version 1.0 and 2.0 of the Lithtech engine at Monolith Productions. WolfDoom was one of his first projects, and it relies on DOOM.WAD or DOOM2.WAD to load the textures from.

Not much is known about WolfDoom. It originally was named LastWolf for being the last Wolfenstein 3D ripoff, but Dussault assumed more people would get this reference if it was named differently. Thus WolfDoom was born. A demo was released on January 29, 1995, with its source code following on April 5, 1995 as the author forgot to include it in the initial release.

WolfDoom uses a custom engine that places it mid-way between Wolfenstein and Doom. Like the latter, it uses a BSP tree on start up, running in Mode X as opposed to Mode 13h in VGA employed by Doom. 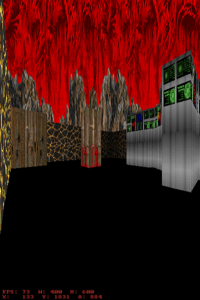 Being a DOS engine, WolfDoom employs several features unique to it: