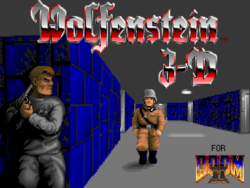 WolfenDOOM is a series of Doom mods which use the graphics from Wolfenstein 3D to recreate the complete Wolfenstein game using the Doom engine. The author, Laz Rojas, has also gone beyond the original Wolfenstein levels by creating some brand new scenarios.

WolfenDOOM includes support for the Apple Macintosh version of Doom in addition to the more common PC version.