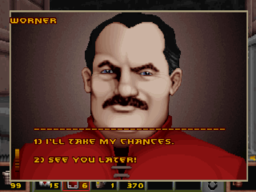 Worner has something to help you sneak into the power station, but it's risky.

Worner is a spy recruited by the Front in Strife.

After freeing the prisoners in Norwall Prison, Macil tells the player to destroy the power crystal found in Tarnhill Power Station, since doing so will punch huge holes in the Order's defenses, allowing the Front to strike. The player is told to meet with Worner. He is located in the warehouse (MAP04) where the peasants are working and being closely watched by acolytes.

Worner appears as an ordinary peasant, but he is stationary and clad in red. When questioned, he claims that he stole an ID card from a careless worker who got killed in a reactor accident. The player is then given the Power1 key and told to masquerade as the replacement for the dead worker, in order to infiltrate the building and destroy the crystal. Worner also provides information about a store chamber found above the warehouse, but it is blocked by a force field. The barrier can be deactivated immediately, but the door requires the gold key to access.

If the player decides to choose the "bloody" chore to make a deal with Governor Mourel, the warehouse will be visited before meeting Worner. It is because Mourel sends the player to kill Derwin, another person in the warehouse. To prevent sequence breaking, Worner is actually hidden behind a "door" that is textured to look like crates. The door will open by a trigger near the entrance of the power station when the prison mission has been accomplished. An adjacent trigger will also make a similar fake door close in front of Derwin. Thus, if the player accepted the "messy" chore and visits the warehouse for the first time, he will never meet Derwin.