Xenomorph 'The complex' is a single-level PWAD for Doom that was released in 1994. It was designed by Daniel Griffiths. 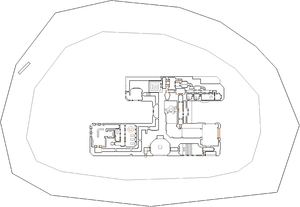 Map of Xenomorph 'The complex'
Letters in italics refer to marked spots on the map. Sector numbers in boldface are secrets which count toward the end-of-level tally.

On medium and hard skills, one imp (thing 172) is placed behind some crates, is flagged as deaf, and is never able to see the player, so cannot be killed. This means that the maximum achievable kill percentage on medium skill is 98% and on hard skill is 99%.

* The vertex count without the effect of node building is 1251.