Yesterday's Nightmare is a single player level for Doom II requiring a limit removing port. It was released during August, 2004 by Ray Schmitz (shitbag) and contains the MIDI "Ordinary Story" by In Flames.

The map is surreal and medieval themed, making heavy use of the GSTONE textures. It is quite small but also fairly difficult with very limited ammunition and over 150 monsters. The architecture is complex, with many structures on the floors and ceilings, as can be seen in the second screenshot. 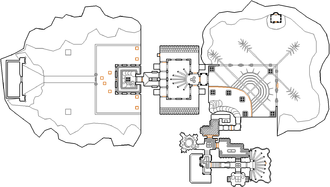 Map of Yesterday's Nightmare
Letters in italics refer to marked spots on the map. Sector numbers in boldface are secrets which count toward the end-of-level tally.

* The vertex count without the effect of node building is 7195.