Z-Secs were originally Mars City Security guards employed by the UAC that were possessed and mutated by evil demonic spirits. The few soldiers who avoided this fate were soon overrun by demonic forces; the player witnessed one marine being strangled to death by a pistol wielding Z-Sec through a communication terminal. In trailers and early in the game, an in-game monitor shows one being possessed by a ghostly skull, which causes his skin to turn white and his eyeballs to explode. Several of the Z-Secs have their eye sockets hidden due to their helmet visor, although it is clear from the blood splatter on the visor that they have lost their eyes. Despite this, they are still able to "see" the player, presumably due to the capabilities of the hellish spirits controlling them.

There are four types of Z-Sec, each with its own distinct characteristics and firearms. These are the pistol guard, shotgun trooper, machine gunner, and riot shield trooper.

Unlike regular zombies, Z-Secs do not suffer from slowed movement, and possess the same speed and agility as a normal human soldier. They are notable for their artificial intelligence (AI), which makes them fight like soldiers. They duck behind objects, lean around cover to take shots at the player, and occasionally rush the player's position. When shot or out of the open, they can sometimes sidestep to attempt to dodge further attacks (this can effectively allow them to dodge a follow-up shotgun blast at close range). However, they do not shoot and move at the same time, leaving them vulnerable to the player's fire when advancing forward from one position to another. They also run noticeably slower than the player does, making them relatively easy to hit when not hiding behind cover.

Like most of Doom 3's monsters, head shots do twice as much damage as regular body shots. Compared to their classic Doom counterparts, Z-Secs are more focused and intelligent, advancing towards and focusing on the player instead of wandering semi-randomly. They also have better aim and are more aggressive, firing more frequently. When alerted, they respond in a radio-distorted voice, and unlike the player, Z-Secs do not need to reload their weapon.

Although Doom 3 Z-Secs serve a cannon fodder role when compared to the game's tougher demonic enemies, they are comparatively tougher than the classic zombie troops and equipped with better AI, and should not be underestimated.

Using cover is extremely important when fighting these zombies, as their projectiles cannot be dodged by circle strafing. The machine gun is generally a good basic weapon against these pests and a good tactic is usually to mow them down with concentrated pistol or machine gun fire, switching to the shotgun to finish them off if they rush the player at close range. It is usually a bad idea to use the shotgun right away as the shotgun has short range and the Z-Secs are tough enough to potentially survive anything less than a direct point-blank blast, leaving players vulnerable after the initial shot. A head shot with the shotgun will kill a Z-Sec instantly, however. With practice, it is relatively easy to ambush Z-Secs by lurking just behind a corner and killing them with a point-blank shotgun blast when they come around the corner to give chase. If they hide behind cover, grenades are also a viable option.

More powerful weapons like the chaingun and the plasma gun are effective against Z-Secs but should probably be reserved for tougher monsters or larger crowds of Z-Secs.

The pistol works well against this type, but the machine gun gets the job done quicker. It is a good idea to keep at a distance, as he is more likely to miss his mark when the player is far away. Due to their low health, the shotgun is also effective against them even when fired from range.

This type should be brought down as quickly as possible, as he is capable of dealing a great deal of damage if left unchecked. Using the machine gun to soften him up at range and then finishing him off when he gets in close is an effective strategy, but caution should be taken only to come out of hiding after he has fired a shot. More powerful weapons should be considered. Running straight at him is not recommended, as you risk yourself to his highly damaging attacks. 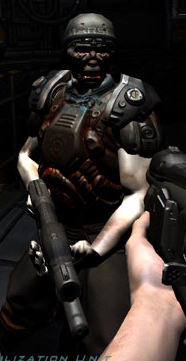 Alternatively, hide behind a doorway when available, shotgun at the ready. Wait for him to charge through the door and blast him in the face. This nearly always works, but be prepared to fire again if for some reason the first shot did not kill him.

Although he fires more than the other types, his bullets are less powerful. Patience is a good tactic, as he tends to pin down the player with prolonged sprays. It is effective to wait for him to come out of hiding, shoot and quickly duck down behind cover before he opens up. It is a bad idea to fire prolonged bursts at him, as he is tough enough to recover swiftly from hits, often enabling him to retaliate swiftly. Machine gunners do not fire and move at the same time, and so they are vulnerable to return fire when advancing forward towards the player's position.

Alternatively, you can use the same doorway tactic as with the shotgun guy. This tactic works better against machine gunners than shotgun guys because even if he survives the first shot, he will take the time to kneel before shooting the player, allowing the chance to score a finishing shot.

This type requires accurate aim and cool nerves as his shield is impenetrable. Keeping one's distance is strongly advised if weaker weapons like the machine gun are used. The best way to dispatch this nasty trooper is to run into him with the chainsaw (it will damage him even when the shield is hit). Another possibility is to hit him with a grenade or with a rocket (when available).

The Z-Secs appear most commonly in early and middle level of the game, before being replaced by the commandos in later levels.

This Z-Sec type is only common in the beginning of the game, and is quickly replaced by the other types. The amount of pistol Z-Secs is the same on all skill levels.

This type of Z-Sec is moderately common, usually encountered sparsely in the levels. The BFG Edition removes only one shotgun Z-Sec from Alpha Labs - Sector 4.

The most frequently encountered Z-Sec type. The BFG Edition removes only two machine guns Z-Secs from the game, one from Alpha Labs - Sector 4, and another one from Delta Labs - Level 3.

One of the rarest enemies in the game, with only a few encountered in only one level.

Only machine gun and shotgun Z-Secs appear in the expansion.