This level occupies the map slot Z1M10. For other maps with a non-standard slot, see Category:Non-standard map slots.

Z1M10: Penultimate Evil is the second secret level in Knee-Deep in ZDoom, accessed from Z1M7: Computer Station. Its primary designers were Daniel Gimmer (Tormentor667) and Björn Ostmann (Vader), and it uses the music track "Waltz of the Demons" by Robert Prince. The par time defined in MAPINFO is 15:00.

Unlike other KDiZD levels, Penultimate Evil revisits areas from episodes two, three and four of Ultimate Doom. Images of these areas can be found in the screenshots section below. Interestingly, the skybox used in the level suggests that it takes place on Deimos.

To access this level, the player must satisfy the following prerequisites by the time they complete Z1M7: Computer Station:

Or, alternatively, if they do not satisfy both prerequisites above, they must have completed every level through and including Z1M7 (Z1M9 is not required) in under the par time.

If these conditions are satisfied, the cutscene played when the player enters the next map will be altered, and they will be sent to this level instead of Z1M8: Phobos Anomaly. 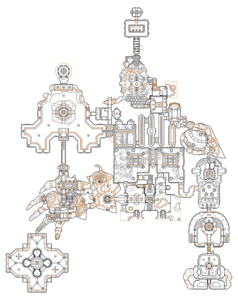 Map of Penultimate Evil
Letters in italics refer to marked spots on the map. Sector, thing, and linedef numbers in boldface are secrets which count toward the end-of-level tally.

You start in a room resembling the cacodemon cage from E2M3, except that the cacodemons are waiting outside it. Take the shotgun, boxes of shotgun shells and health bonuses, then leave the room through the north-east doorway and wade through the nukage to the south side of the cage to find a doorway leading into a small passage. Follow the passage south until you reach an area resembling the central section of E4M2 and kill the chaingunners waiting on either side of the red grid, then run up the gray steps and jump south across two sets of lava tanks to reach the brown pillars on the other side of the chamber. Kill the dark imps and jump up the pillars until you reach the top, then head east to a small door leading to the bridge area from E3M3. Cross the bridge and go through the south-east door to enter an area based on the crucifix room from E2M7. Two of the other doors are locked, but you can go through the south-east door then head south through another door to find one or two Hell warriors guarding a curved bridge (loosely based on the bridge from E3M1). Cross the bridge, watching out for cacodemons that appear as you collect the health bonuses, and kill the rocket zombie on the other side then enter the tunnel in front of you and follow it south to the starting area from E2M6.

Kill the dark imps at the T-junction then head east to find a barred doorway ahead. Turn right here to enter a chamber with zombiemen and shotgun guys then go round the crates to find a cacodemon guarding a lion switch that will open the bars. Go through the now-open doorway and head south across the nukage to a ledge guarded by soul harvesters and shadows, then continue south through a door to reach an area resembling the central hub of E4M8. Kill all the zombies and blood demons in this area then look at the red and blue terminals either side of the entrance door - press use on the blue terminal first to open the east door and quickly interact with the computer behind it, then press use on the red terminal to open the west door to reveal another computer that will activate the central core. Head round the core to open the south door and reveal a Hell warrior, then go up the steps behind it and open the next door to find a rocket launcher. Kill the demons and Hell knights/barons of Hell then go up the east and west slopes to find two buttons that will open the central structure, revealing a bruiser demon guarding the blue keycard.

Go back to the E2M7 area and open the blue door recessed into the west wall, which leads to an area resembling the blue-light tunnels from E2M2. Head through all three tunnels, which are guarded by dark imps and rocket zombies, and open the door at the end of the third tunnel to reach the west side of a large crate maze (note that the door is one-way). Go north and west around the crates to reach another blue key door, open it to confront some demons and dark imps then head north to a room with a nukage pit - the red keycard is through a doorway on your right, guarded by knights or barons. With the red key, return to the crate maze and go back to the one-way door you used earlier; there are some small boxes near this door that you can use to jump over the row of crates blocking your way to the south part of the storage area. Head south through the crates until you reach the south-west side of the storage area, where you will find a red key door that leads to an area based on E2M1. Kill the cacodemon blocking your way then head south past some chaingunners to a switch that you can flip.

Flipping the switch will open a set of bars behind you leading to another red key door - open this door to reach an outdoor area then follow the path south, east and north to find a grenade launcher guarded by barons (plus a Hell's Fury on Ultra-Violence and Nightmare skill levels). As you approach the grenade launcher, look right to see a doorway with a shotgun guy guarding a button that will open a set of bars later in the level; after pressing this button, go to the nukage on the west side of the outdoor area and open the door in the west wall to enter a hand-shaped cave (vaguely reminiscent of E3M2). Approach the structure in front of you that holds a cacodemon and walk past its left-hand side to see the bars you opened earlier - after walking through these bars, head south-west to walk between a pair of red-panelled terminals then go up the slope to find an armor in front of a door. Open this door then follow the tunnel south-west to find a knight (or baron on Hurt Me Plenty skill level or higher) guarding a set of bars that will open as you approach.

Go through the bars to enter an area based on the center of E3M5 and look in the middle of the structure to find the yellow keycard being guarded by shadows. Taking the key will open the columns around you to reveal soul harvesters, blood demons and barons/furies, and many other monsters will teleport in - kill them all while you wait for the entrance to this area to re-open, then head back to where you found the armor. Jump over the low wall to the north-west to land on a crate, then walk north into the neighboring cavern before jumping over the east wall to find a satyr guarding a door. Open this door then head up the slope in front of you to another door guarded by imps; after opening this door and killing the satyr waiting behind it, continue heading north past a blood demon and one or two rocket zombies until you reach an arena based on E3M8. Approach the large column in the middle of the arena and it will open to reveal four bruiser demons; after killing them all, you will be informed that the exit is now open. Drop into the flesh-pit in the middle of the column to finish the level.

When you reach the E4M2 area, drop into the lava and head north-west to find a berserk pack next to a vent that will put you back on track.

The northern-most "finger" in the hand cave contains a backpack and a box of rockets. The two fingers below it contain a partial invisibility and a chaingun surrounded by lava; destroy the lost souls waiting in the lava before trying to jump for the items, as you may not be able to escape the lava if you fall in.

As mentioned above, this level is compromised mostly of areas from Ultimate Doom levels after Knee-Deep in the Dead. Note that this list is most likely to be incomplete, and that the screenshots are listed in no particular order.