This level occupies the map slot Z1M1. For other maps with a non-standard slot, see Category:Non-standard map slots.

Z1M1: Hangar is the first level of Knee-Deep in ZDoom. It is a reimagining of Doom's E1M1: Hangar with new areas and enemies. The primary designer was Daniel Gimmer (Tormentor667). The par time defined in MAPINFO is 7:30. 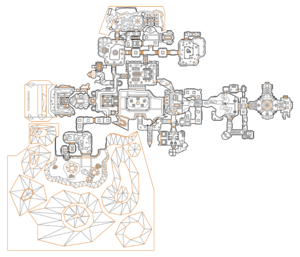 Go up the ramp in front of you to a storage room then head north and west through the crates until you see a door on your left. Go through this door and a second smaller door behind it, then go up the red steps and flip the switch at the top - you will see a door open on the screen next to it. Go back to the storage room and kill the zombiemen coming through the now-open north door, then follow the passage to confront some imps and open the small door next to them to reach the original entrance area from E1M1. Follow the red carpet north past some more imps and zombiemen until you reach a door, and open it to find a tall room containing imps and rapid fire troopers. Open the north door to enter an airlock with two more troopers, then open the second door behind them to get outside.

Head east to a silver door and go through it, turn right to confront some imps and zombiemen then open the tan door in the south-west corner and follow the path behind it to a button - pressing the button will lower a platform with a shotgun, and when you collect it the passage will darken and two closets will open containing demons, stone imps and the red keycard. Take the key then return to the previous room and leave by the south door, then go through the red key door just ahead to your right and kill two demons waiting behind it. Enter the red and black structure in the middle of the hall to find the yellow keycard, then go back through the red key door and turn right, following the path up and down two staircases to a yellow key door. Open the door and kill any waiting imps, then go through the north door (two troopers will be waiting here on Hurt Me Plenty (HMP) skill level or higher) and use the lift to reach the upper floor. Go through the door on your right and kill any waiting imps and troopers, then make a running jump to the computer structure in the middle of the room to collect a seismic bomb.

Go back to the yellow key room and interact with the south-east wall to plant the bomb, then step back and wait for it to explode and clear the passage. Head through to the next room and go east to a broken bridge, then make a running jump so you land on the zig-zag walkway ahead. Look south and kill the shadows waiting ahead, then go up the stairs they were guarding and head north past a couple of zombiemen until you see a UAC door on your right next to a crate. Open the door and go up the steps to confront some zombiemen, then look north to see more shadows guarding a button; press it, then go back through the UAC door and head north through a now-open door. Follow the passage to another button and press it, then backtrack to the zig-zag walkway and make a running jump west to get back across the broken bridge - the platform in the south-east corner has lowered revealing one or two imps and another shadow. Flip the switch that the monsters were guarding to lower a lift behind you, ride it up then head north across a grid bridge and turn left to see a button next to a screen (watching out for a shadow hiding behind the nukage on HMP or higher). Pressing the button will lower the radiation levels in front of the south doorway, allowing you to continue to the exit area.

Drop to the ground below and head through the south door, then kill the zombies and imps hiding behind the fences on either side. The exit door ahead will not open, but you can use the tunnel in the south-east corner to reach the final room where a trooper and two shadows are guarding the exit switch.

The armor west of the original starting area is behind a green forcefield. You can lower the forcefield by flipping both switches either side of the entrance to the armor room.

After lowering the radiation levels, approach the door to the penultimate room but do not enter it; instead, go through the west door and follow the passage to reach the outdoor area in the middle of the map. Just like the original level a megaarmor can be found in the nukage pool, but you have to swim under the surface to reach it.

This level contains the following number of things per skill level.