This level occupies the map slot Z1M2. For other maps with a non-standard slot, see Category:Non-standard map slots.

Z1M2: Nuclear Plant is the second level of Knee-Deep in ZDoom. It is a reimagining of Doom's E1M2: Nuclear Plant with new areas and enemies. The primary designers were Nick Baker (NiGHTMARE) and Michael Niggel (Risen). The par time defined in MAPINFO is 7:00. 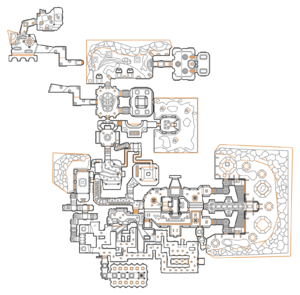 Map of Nuclear Plant
Letters in italics refer to marked spots on the map. Sector, thing, and linedef numbers in boldface are secrets which count toward the end-of-level tally.

Turn right as soon as the level starts and head towards a silver door, open it and go up the red staircase to a wide hallway with zombiemen and imps. Look west to see the red keycard (which is guarded by soul harvesters on Ultra-Violence (UV) and Nightmare (NM) skill levels) and pick it up, kill the imps that teleport in behind you then return to the starting room and go to the west wall to find a red key door. Go through the door to a red hallway and turn right to reach a room with imps on a platform surrounded by nukage, then step over the nukage and flip the switch on the east side of the central column. Go back to the hallway and head south down a set of steps that have been revealed to reach the entrance to the reactor maze, which is guarded by demons and spectres.

There are two doorways leading into the maze - go through the east doorway, head east through a low doorway then follow a passage east until you see a light-gray block ahead. Just before the block are two square computer screens with a button in between them; press the button then head south past a green forcefield and follow the path west until you reach a junction, then continue west until you see a red doorway on your left and go through it. Follow the passage round the corner to a bridge protected by a satyr (or two shotgun guys on UV and NM) and approach the button in front of you. Press the button to shut down the reactor (which will cause the lights in the area to go out) then go back through the red doorway and head north-west to find an armor in front of another doorway.

Go through the doorway then climb the steps and look round the corner to see two stone imps and a shotgun. Go through the doorway here and follow the path past more stone imps to a room with a chainsaw on a pillar, which is guarded by mauler demons and rapid fire troopers. Press the button in the north-west corner to lower the chainsaw if you want it, then press the green button on the south wall - the screen next to it will show a set of bars lowering elsewhere in the level. Backtrack through the reactor maze to the red hallway then head west up the staircase to a curved walkway over nukage and follow it round - watch out as you pass the east wall, as it will open to reveal a demon ambush. Kill the rapid fire troopers at the end of the walkway and head north through the bars you opened earlier, then step on the lift to be carried down to a chamber with imps. Flip the switch on the north wall, which will light the three platforms above you revealing imps and soul harvesters - the north-east and north-west walls will then open to reveal stone imps.

Go through the walls that opened and head north through a small door to a hall with a bird symbol on the floor (there will also be six soul harvesters on Hurt Me Plenty (HMP) skill level or higher). Open either of the east doors and kill the demons waiting behind them, then go through to an outdoor area with shotgun guys and press the button on the east wall; this will lower a column behind you with two mauler demons, plus three imps on HMP or higher. Return to the bird hall and go through the now-open north door, then go up the steps in front of you and proceed east past some imps and shadows until you reach a lift that will carry you down to a door. Open the door to see demons, imps and soul harvesters guarding the yellow keycard; when you approach the key the doors behind it will open, releasing three mauler demons (as well as regular demons on HMP or higher).

Backtrack to the bird hall and go back through the south door, then follow the passage east past some spectres until you reach the exit door guarded by a mauler demon. Open the door using the yellow key, kill the zombiemen and shotgun guys in the exit room then press the button below the lift to finish the level.

As soon as the level starts, enter the structure in front of you and turn left to see a lift. The lift will take you up to a shotgun and a box of shotgun shells, or four shotgun shells on HMP or higher.

This level contains the following number of things per skill level: