This level occupies the map slot Z1M3. For other maps with a non-standard slot, see Category:Non-standard map slots.

Z1M3: Toxin Refinery is the third level of Knee-Deep in ZDoom. It is a reimagining of Doom's E1M3: Toxin Refinery with new areas and enemies. The primary designers were Björn Ostmann (Vader) and Pawel Zarczynski (NMN). The par time defined in MAPINFO is 17:00.

The secret exit to Z1M9: Military Base is accessible from this level. 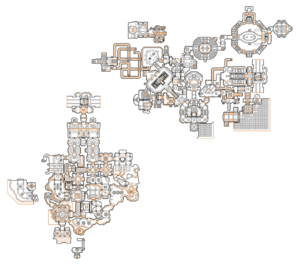 Collect the shotgun in front of you (on I'm Too Young To Die and Hey Not Too Rough skill levels) then open the door and turn left, following the path past zombiemen (plus shotgun guys and a spectre on higher skill levels) to a silver door. Open the door and blow up the barrel behind it to kill some waiting monsters then head north up some steps and turn left at the top, going down a staircase and turning left to find a button that will open a nearby wall. Go back to the barrel area and head north-west through the wall you just opened, pushing past some shotgun guys to a rectangular computer area. Head round the structure in front of you to its north-west side to find a door, then open this to locate the yellow keycard.

Go back to the barrel area and head north up the steps again, then continue north to a silver door and open it to enter a gray room with zombies and imps. Go through the room and head round the corner to a circular room with two rotating shafts then proceed east to a passage with soul harvesters, which leads to a bridge over three deep nukage pools. Cross the bridge and head round the computer block on the other side to find a yellow key door, open it and go round the corner to find the blue keycard being guarded by a single shotgun guy. When you try to leave the room after collecting the key, the door will slam shut and the lights will turn red; wait for the north and south doors to open and reveal satyrs and kill all of them to re-open the entrance door, which will have a Hell warrior waiting behind it.

Backtrack to the starting area; after passing through the silver door leading to the starting area, head east through two narrow doorways to another silver door requiring the blue key. Open the door and kill the rapid fire trooper blocking your path, then enter the next room and go through the east door. Climb the stairs and follow the passage until you step over a nukage stream, then turn right to see a staircase with one or two soul harvesters on it. Climb the stairs and kill the waiting zombies, then head up another set of stairs and open the door at the top to find some troopers in front of a green door that will not open. Look east to see a lift with a barrel and ride this down to a room with imps and more barrels, then go outside and follow the path round a corner to some zombies. Open the door ahead, watching out for a chainsaw zombie hiding on your right, then kill the chaingunners/troopers in the next room and press the button on the east wall. Kill the blood demons that are released to re-open the entrance door, then return to the lift and ride it back up to find that the green door has opened, letting you collect the orange keycard.

Backtrack to the starting area; after passing through the blue key door, go through the doorway on your right then turn left to see a switch - flip it to lower the lift and go down to the mines. Kill the chainsaw zombies waiting at the bottom of the lift then open the west door to find some demons in a room filled with barrels. Go through the south door to a cross-shaped walkway and flip the switch on the east wall to open a nearby set of bars, then head west over a second crossroads and into a passage with lights. Follow the passage to a third crossroads and head west to another passage, which leads to a room with one or more mauler demons as well as a button that activates the secondary pump. Press the button then return to the second crossroads and wait for the south door to open.

Once the door opens, go through it then press the button in the north-east corner being guarded by a satyr - this will unlock a door elsewhere in the mine which you will need later. Leave the room using the east door and dispose of any waiting monsters, then head south into a tunnel and follow it until you go round a corner to a larger cavern with troopers and an imp; note the door in the north wall as you will need to use it later. Head west into the next cavern with a circular pool of brown water and kill the waiting demons and soul harvesters, then step on the south lift with a chaingun to go down to a chamber with one or two mauler demons. There are two buttons in this chamber protected by chaingunners - press the west button (requiring the orange key) to open the bars blocking the east button, which has a megaarmor in front of it. After pressing both buttons, ride the lift back up and go east into the previous cavern, then open the north door you saw earlier to enter a small room with one or two troopers. Go down the ramp behind the troopers and kill one to three chaingunners who are protecting the red keycard.

With the red key, go back up the ramp and leave the room using the south door then head west to return to the cavern with the circular pool. Go through the east door and follow the passage to a room with shadows guarding a backpack and other supplies, then open the north door (which you unlocked earlier) to confront a stone imp. Go through the door and turn left to find a room with a shotgun as well as a door requiring the red key; open this door to reveal a button that will raise two switches behind you. After flipping both switches, press the button between them to power the generator.

Return to the lift you used to enter the mines and kill two Hell warriors that have appeared here, flip the switch by the lift to return to the starting area then go through the blue key door again. Head north-east through either of the doorways by the nukage pool then follow the passage to a large room with a staircase. Kill any lingering zombies then head up the stairs and open the door at the top. Kill one or more waiting demons then enter the shuttle and press the button inside it - the level will end after a short delay, taking you to Z1M4: Command Control.

To find the secret exit you will need all six keys - four are acquired by playing through the level, while the green key is found in secret #3 and the silver key is found in secret #7. With all the keys, enter secret #11 and press the button here then go to the neighboring storage area to find that the north door has opened. Kill the satyrs behind the door then open a second door behind them to find a shuttle - its door will slam shut as you approach and a pentagram will appear on the floor. Kill two Hell warriors that teleport in then enter the shuttle and press the switch inside it to move on to Z1M9: Military Base.

From the starting area, head north to find a room containing several zombies (this room led to the secret exit in the original level). Look behind the round column in this room to find an armor.

Pass through the blue key door to enter a room with a nukage pool. If you drop into this nukage you can swim into a tunnel, then travel east and south to find a chainsaw.