This level occupies the map slot Z1M6. For other maps with a non-standard slot, see Category:Non-standard map slots. 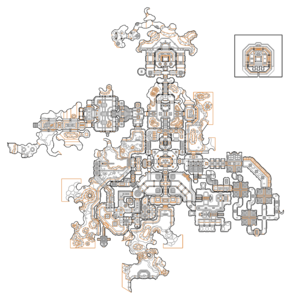 Head straight forward to find a shotgun then continue following the path, which is overlooked by imps and/or dark imps, until you reach a tan door. Open the door and kill a Hell knight waiting behind it then go forward to a crossroads and turn right to see a bridge with shotgun guys on it. Cross the bridge and head into a large room with zombies then go to the north-east corner to find the red keycard along with a chaingun. Taking the key will open four closets containing imps, shotgun guys and demons.

Return to the crossroads and go back to the south entrance door but do not open it; instead, head west through a smaller door and kill one or two blood demons waiting behind it then follow the passage down some steps to some imps. Continue following the passage until you see a demon (or spectre on Hurt Me Plenty (HMP) skill level or higher) on your left guarding a radiation shielding suit and pick it up, then open the west door and push past some dark imps to a nukage pool. Enter the nukage and wade through it to a hole in the west wall that you can step through to get outside, then head north until you reach a crevasse surrounded by a fence and crates. Head east between the crates then north over a bridge, passing rapid fire troopers and shotgun guys on the way, then continue north to a door which is guarded by one or two Hell warriors. Open the door and flip the switch behind it to activate a cargo lift leading up to the next floor.

Kill the zombies in front of you then head through the east door to a chamber with a drill. Head north past some more zombies and go up a slope to confront some shadows, then follow the next passage left or right until you find a doorway leading to a dark cavern. Head due north until you enter a narrow tunnel, then follow the tunnel west past a knight (or baron of Hell on HMP or higher) and continue on to a marble altar holding a battery which you can pick up. Watch out for soul harvesters ambushing you from either side as you approach the altar, and for a Hell's Fury that appears in the tunnel on the way back. Go back to the doorway leading into the cavern and head south to a lift; the lift is unpowered, but if you look behind it you will find a small orange slot that you can use to put the battery inside it. Go back to the lift and press the button to be carried up to a tower where a knight (or baron on Ultra-Violence and Nightmare skill levels) is waiting for you, then go through either door in the south-east and south-west corners and follow the path round to a silver keycard.

Ride the lift back down and kill any cacodemons waiting at the bottom, head south down the slope to the drill area then open the east door to find some zombiemen and a chaingunner guarding a second door requiring the silver key. Go through the door to an outdoor area with several imps and a baron (or another Hell's Fury on HMP or higher) then head south to another door which has one or two mauler demons hiding behind it. Head west to enter the command center, kill a knight guarding an armor then press the button in the middle of the room which has red key markings - this will grant you "beta clearance" and open any red-lit doors in the level. Leave the command center through the south door to return to the crossroads near the start of the level, then head across the west bridge and go through either of the open doors to a passage guarded by zombiemen and shotgun guys. Follow either passage until you find one or more troopers guarding the blue keycard; approaching the key opens a door behind you, revealing imps and a knight guarding a chainsaw. Taking the chainsaw causes some imps and stone imps to teleport in outside the room.

Go back to the command center and flip the switch in the middle of the room that has blue markers to gain "alpha clearance", then head east until you reach a tunnel with blue lights and go through the open door at the end which has a rocket zombie waiting behind it. You will be standing in a T-junction - head east into a hallway with blood demons and follow it to a crossroads, go south and then south again at the next junction before rounding the corner to find a button guarded by a baron. After pressing the button, go west and head round the corner to a second crossroads, then go north to a passage leading to a third crossroads; enter the open door straight ahead of you and follow the path past some zombies and imps until you find the yellow keycard being guarded by a satyr. Taking the key will open a door nearby revealing chaingunners and a knight and/or Hell warriors.

Backtrack to the command center and flip the final switch with yellow markers to gain "gamma clearance", which will automatically open the yellow-lit doors to the north. Go through the middle door (which has demons waiting behind it on HMP or higher) to find a lift but do not use it right away; instead, open the door opposite the lift and flip the switch behind it, which will disengage the master lock and unlock the doors leading to the exit. Use the lift now and head straight forward to the drill area, then head west to return to the chamber with the cargo lift; from here you can go down the north or south staircases and open the large metal doors at the bottom to enter a room with a fenced pit. Kill the chaingunners and other monsters overlooking the area then head south and west along the walkway to a button, press it then quickly head round to the other side of the pit to step on a lift before it rises again. Kill the baron ahead then step on a second lift behind it to be taken down to a hallway with a Hell's Fury; the exit door behind the Fury is jammed, but you can jump over the broken wall to the south and follow the path behind it to end the level.

Between the staircases leading to the master-lock doors is a third staircase leading up to a super shotgun.

After riding the platform up to the room west of the fenced pit, open either of the west doors to reveal chainsaw zombies guarding a grenade launcher.