This level occupies the map slot Z1M7. For other maps with a non-standard slot, see Category:Non-standard map slots. 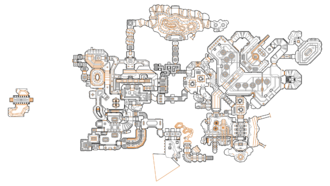 Take the shotgun and box of shotgun shells in front of you then follow the path west past demons, imps and dark imps (plus blood demons on Hurt Me Plenty (HMP) skill level and soul harvesters on Ultra-Violence and Nightmare) until you reach a metal doorway, then head down the slope until you find one or more Hell warriors guarding a door. Go through the door (which leads to the starting area from the original level) to find a chaingun then open the next door to find an armor guarded by shadows. Head south and step over the red power conduit (which is highly damaging) to reach a red hallway then go east to a chamber with some overhead imps. Use the lift by the east wall to get on the platform and follow it round to a small maze containing shotgun guys, collecting a backpack on the way. Inside the maze, turn left and left to reach a junction then go right and turn right again to a second junction - follow either passage to a door and open it to confront some imps.

Head through the archway behind the imps to face some zombies then turn right to enter a room with a pair of red computer columns (grab the berserk pack by the entrance if you need it). Head south-west up a ramp then follow the path down some steps (watching out for a wall opening on your left to reveal one or two satyrs) to a broken wall and step through it to a room with a tall tech platform in the middle. Go round to the north side of the platform to find a lift that lowers as you pass it, ride this lift up to get on the platform then look east to find a rocket launcher and the yellow keycard. Head back down to ground level then go through the doorway in the south-west corner and follow the path south past some shotgun guys, then go up the curved steps to find some more shotgun guys (and troopers on HMP or higher) guarding a supercharge. Taking the supercharge will open alcoves in front of and behind you containing shotgun guys and troopers (plus spectres and mauler demons on HMP or higher); kill them all to open the west door and push past the imps behind it, then head south-west to a staircase that leads down to a passage with more zombies. Take the silver keycard in this passage and kill the imps that appear, then push the button behind the key to re-open a couple of sealed walls.

Retrace your steps to the room with the red computer columns then head north and east past some fleshy growths, looking left to see a silver key door. Open the door and kill any shotgun guys, troopers and Hell knights waiting behind it, then head north-east through a curved door and climb the steps which are guarded by imps and troopers. Follow the fenced passage at the top south and east, collecting a chaingun on the way, until you reach a switch; flipping it will open the door to the orange keycard room. Backtrack through the curved door (some enemies you killed earlier will have resurrected) and head south to a walkway running round a large nukage pool, then follow this walkway all the way east to a door; open the door to find a staircase with several enemies and go down it to another door, behind which you will find some imps guarding a third door. After going through this third door, enter the passage in the right-hand wall to find the door you opened earlier being guarded by a Hell warrior and head through it; behind the door is a room with troopers, blood demons and dark imps (plus rocket zombies on HMP or higher) guarding the orange key. Watch out for the Hell's Fury that appears behind you when you take the key.

Head back through the silver key door then follow the hallway south-east until you reach a door requiring the orange key; after passing through it, head due south along an arched passage until you reach the red keycard which is sitting on a computer terminal. With the red key, backtrack to the area where you found the supercharge and head north-west into a passage that you can follow to a door requiring that key. Open the door and kill any enemies waiting behind it, then go through the west doorway and use the lift to get up to the next floor. Follow the passage round two corners to find a Hell warrior guarding a switch and flip it; this will deactivate the forcefield blocking your way to the green key, which you can see below. Make your way back to the yellow key area, watching out for three monster closets that have opened on the way, then go through the west door and follow the red-carpeted corridor north until you reach the forcefield you just deactivated. Go through the doorway and collect the green key sitting on the plinth.

Go back to the orange key door and go through it, then immediately turn right to find a platform with a switch. Flip the switch to lower the platform and descend to a cavern with a lava stream, then follow the path west and south past some dark imps and lost souls until you cross a bridge leading to a green key door. Open the door and head straight forward to find the blue keycard, dispose of two barons of Hell that are revealed behind the back wall then head back to the yellow key room and head into the south passage, looking to your left for a door behind some blue lights. Open the door and go up the steps to a hall with dark imps and shotgun guys, then open the door in the south-west corner and follow the passage behind it past several zombies and a blood demon - the passage will loop back on itself to another door, behind which is a button that you need to press. Go back to the hall and kill the dark imps waiting behind the south-east door, then go through the exit door here and press the button at the end of the passage - the room will go dark, then the walls on either side of the passage will lower to reveal cacodemons. Kill all the enemies then jump into the north-east alcove and follow the flesh tunnel behind it until you enter a brick passage containing a Hell's Fury. Kill it along with the Hell warrior that teleports in behind you (or another fury on HMP or higher), and the exit door will automatically open to reveal mauler demons. Go through the door to finish the level.

After finishing this level you will normally move on to Z1M8: Phobos Anomaly; however, if you meet the conditions to enter Z1M10: Penultimate Evil then you will be sent to that level first.

Go to the west side of the maze area near the start to find a chaingun and two piles of rifle cartridges.

A chainsaw can be found in the passage leading to the silver key.

In the red key room, jump through either of the windows to enter a cavern with a supercharge. Cacodemons and/or lost souls will emerge from the flesh-hole in this cavern; do not fall in the hole as it will kill you.

A barrel (Thing 114) is placed outside the map.

This level initially contains the following number of things per skill level. It does not include things spawned via scripts. Some monsters will be resurrected over the course of the level.