This level occupies the map slot Z1M8. For other maps with a non-standard slot, see Category:Non-standard map slots.

Z1M8: Phobos Anomaly is the eighth and final level of Knee-Deep in ZDoom. It is a reimagining of Doom's E1M8: Phobos Anomaly with new areas and enemies, ending with a showdown against barons of Hell, bruiser demons and Magmantis the Deimos Guardian. The primary designers were Daniel Gimmer (Tormentor667) and Björn Ostmann (Vader). The par time defined in MAPINFO is 15:00. 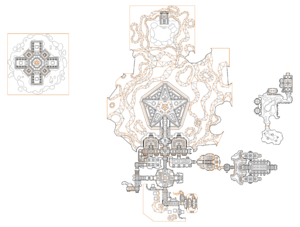 Map of Phobos Anomaly
Letters in italics refer to marked spots on the map. Sector, thing, and linedef numbers in boldface are secrets which count toward the end-of-level tally.

Take the shotgun in front of you and kill the demon waiting next to it, then follow the passage past a Hell warrior and one or two satyrs (you will see a forcefield with the yellow keycard behind it, but it cannot be reached from here). Open the door at the end of the passage and flip the switch behind it to reveal a circular nukage pool surrounded by barrels; the blue keycard is on a pillar in the middle of the pool. Go through the south door and start following the corridor - after a short distance, the screen will flash red and marble blocks will appear outside. Kill the cacodemons that appear outside to make things return to normal, then dispatch the zombies that are released and follow the corridor to the end to reach another door. Open the door and jump over the trench to find a button and press it, then step back over the trench where two nightmares have appeared - you can only see or kill them when they are in melee range. Fight your way past some demons to return to the circular nukage room where the blue key has lowered; taking it will resurrect all the dead demons in the room, so quickly blow up the barrels to dispose of them.

Go down the north staircase and open the blue key door at the bottom to reach a crossroads; the door ahead requires all three keys to open it. Go through the west doorway and kill the imps waiting in the hallway, then head up the red stairs and walk round the computer screens to find a button - this is one of two needed to lower a set of bars behind the triple-locked door. Go back to the hallway and open the west door (a satyr will be waiting behind it on Hurt Me Plenty (HMP) skill level or higher) then go round the corner to see a wall explode and release some shadows. Follow the passage to the next door and open it to find a U-shaped path guarded by dark imps, satyrs and a Hell warrior (or Hell's Fury on HMP or higher), then follow the path round to another door and open it to find shotgun guys and demons guarding a partial invisibility; be careful when approaching this item as chaingunners are waiting to ambush you from your left. Go through the door behind the chaingunners to find the yellow keycard along with a super shotgun.

Return to the crossroads, fighting your way past any barons of Hell that have appeared, then head through the east doorway to a corridor with a chaingun. Go up the red stairs here and walk round the computer screens to find the second button that will lower the bars behind the triple-locked door, then return to the stairs and watch out for a nightmare that has spawned. Head through the south door to enter a hall with some overhead shadows, use the lift by the west wall to get on the ledge and follow it round to a button (watch out for demons and/or blood demons that are released behind you). After pressing the button, drop to ground level and head through the now-open east door to confront a mauler demon then head up the stairs to find an armor (two Hell knights will appear to defend it). Go through the hole in the south-east wall to find a small chamber with one or two dark imps, then open the east door to find a mauler demon guarding another door that leads to an outdoor area with blood demons.

There are three doors ahead of you, but the middle door is locked. Head through the north door and kill the shadows waiting at the bottom of the steps, then head forward to find a Hell's Fury guarding a button; press this button then return to the outdoor area, head through the south door and repeat the process to find a second button that will unlock the middle door. Go back to the outdoor area and head through the now-open middle door, then head round a lava pit guarded by zombiemen, shotgun guys and imps to find the red keycard being protected by two knights (and a baron on Ultra-Violence and Nightmare skill levels). Taking the key will open several alcoves containing demon cubes; fight your way out then return to the crossroads, passing some imps and a baron that have appeared, and head through the triple-locked door.

Kill the two Hell warriors guarding the rifle in front of you then head north into a passage - a baron will appear at the other end but keep moving towards it as the floor is collapsing behind you. There is a switch behind the baron which does nothing at first; once most of the floor has fallen away, you can use the switch to lower a lift that will take you up to a star arena. As you step off the lift three knights and two barons will teleport in; kill them along with the demons waiting in the arena, then step on the glowing pentagram in the middle of the arena to be sent into a region of Hell. Head north to a cavern with a lava pit guarded by demons, cacodemons and lost souls, then continue east and north past a baron to enter a chamber with a megasphere and some satyrs. Taking the megasphere will allow some cacodemons to teleport in to the chamber; kill all of them then head north through a glowing flesh-wall to be teleported to a cross-shaped arena.

The cross arena initially contains two barons and several blood demons; shadows and demon cubes will join them once you start killing the barons, and three more barons will teleport in during the battle. Once all the barons are killed, step on the glowing pentagram in the middle of the cross to return to the star arena where a supercharge has appeared; taking it will spawn two barons as well as lowering two columns to reveal bruiser demons. After killing both bruisers, the outer walls of the arena will lower revealing an apparently empty landscape - leave the arena and head due north until you drop into a large depression where Magmantis the Deimos Guardian is waiting for you; the game will autosave at this point.

Residing in a lava pit, Magmantis generates red portals that fire homing fireballs and generate lost souls; as its health is reduced it can disappear into the lava and rain lava bombs on the entire area. Fire every weapon you have at Magmantis starting with the rifle, but keep an eye out for imps spawning behind you as well as parts of the platform collapsing into the lava - use the health bar at the top of the screen to monitor your progress. Once Magmantis is killed, climb up the large staircase at the north side of the pit and walk into the large flesh-gate at the top to finish the episode.

In the blue key room, step on the lift in the east wall to be carried up to a chamber with a backpack, a box of bullets and four stimpacks.

A button can be seen by the west door in the passage west of the crossroads; pressing it toggles some red forcefields on and off, which will instantly kill smaller monsters that try to walk through them and severely damage larger enemies.

In the middle of the Hell area is a chamber with several wooden doors. Open one of the north doors to find dark imps guarding a partial invisibility and a skull switch, which will open two more doors revealing Hell warriors and shadows - enter their chambers to find a rocket launcher, a super shotgun and ammo for both weapons.