Z1M9: Military Base (Knee-Deep in ZDoom)

This level occupies the map slot Z1M9. For other maps with a non-standard slot, see Category:Non-standard map slots.

Z1M9: Military Base is the first secret level of Knee-Deep in ZDoom. It is a reimagining of Doom's E1M9: Military Base with new areas and enemies. The primary designer was Ryan Turner (BioHazard). The par time defined in MAPINFO is 9:30. 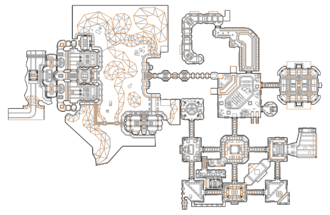 Step out of the shuttle then turn left and follow the passage to a door, which leads to the central hub - there are four staircases guarded by rapid fire troopers (and shotgun guys on Hurt Me Plenty (HMP) skill level or higher), as well as a cage full of imps in the middle of the hub. Go down the west staircase (marked 1) and head through the door at the bottom to see the yellow keycard behind a fence, then walk round the fence to collect it.

Return to the central hub and go down the south staircase (marked A) then open the door at the bottom to find the blue keycard behind a forcefield. Head east down a second staircase (marked 2) and go through the door at the bottom to find the red keycard which is guarded by two soul harvesters, joined by troopers, dark imps and a rocket zombie on HMP and two shotgun guys on Ultra-Violence (UV) and Nightmare (NM). Take the red keycard and the metal wall behind it will fade away to reveal rocket zombies (and shadows on HMP or higher); kill them then return to the blue keycard and head west down a staircase marked 3. Open the door at the bottom to confront more soul harvesters (plus shotgun guys on HMP and two rocket guys hiding in the north-east corner on UV and NM), then look in the south-west corner to find some barrels in front of a button.

Pressing the button deactivates the forcefields around the blue key; go back up the staircase and kill the mauler demons that have spawned around the blue key, then pick it up before returning to the central hub. Head down the north staircase (marked 4) and go through the door at the bottom to a storage room with demons, imps and shotgun guys then go through the door in the north wall and follow the tunnel past some demons and imps to another door. Behind this door is a walkway over a nukage trench which is protected by dark imps; follow the pathway until you reach a switch guarded by stone imps and flip it, then return to the storage room to find that the fences blocking the nukage trench in the north-west corner have been removed. Step over the trench and flip the switch here to lower a lift leading down to a narrow tunnel.

Follow the tunnel until you reach a large outdoor area with demons and blood demons then head to the building in the south-east corner, killing any enemies shooting at you from the upstairs windows. Open the door and kill any waiting enemies then go up the ramp and follow the walkway round to the south-west corner where a couple of dark imps are guarding a switch. Flip the switch then go back outside and head for the north-west corner to another building, open the now-unlocked door and flip a second switch which is defended by a Hell warrior. Go back outside to find that the large doors of the west building have opened to reveal blood demons and more Hell warriors, then go through either door and head south-west to find a tan door with a lift behind it. Ride the lift up to the upper floor and go round the corner to confront some soul harvesters, then head east over a bridge to find chaingunners guarding a final switch. Flip the switch then head back across the bridge, where two doors have opened to reveal Hell knights; push past them to a shuttle and press the button inside it to finish the level.

Head down the north staircase from the yellow key room to find a rocket launcher and four rockets on a red star. Taking the weapon will cause blood demons to spawn around it.

From the central hub, head down the east staircase to a room with a lift. Press the button on the lift to be taken down to an area with three dark imps - you can get an armor by jumping into the nukage, and some armor and health bonuses by following the north path.

The room behind the blue key door has two more doors on its east side. The south door has a backpack behind it, while the north door leads to a chamber with two Hell warriors guarding an armor and a rifle. Taking the weapon will open three walls to reveal imps (plus dark imps on UV and NM), as well as spawning Hell knights.