The ZDoom Community Map Project, or ZDCMP, is a very large map made collaboratively by many ZDoom community members, each contributor adding a new section to the map or improving on previous work. The project sought to highlight ZDoom's capabilities by going well beyond the usual limits of Doom maps and using several then-new features such as custom monsters, swimming in deep water, scripted puzzles, and so on. It was well-received, earning one of the 2004 Cacowards, and spawned two separate attempts at a sequel, the second of which was successfully completed and also received a Cacoward. 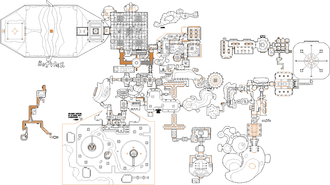 Map of ZDCMP
Letters in italics refer to marked spots on the map. Sector numbers in boldface are secrets which count toward the end-of-level tally.

* The vertex count without the effect of node building is 24047.

The room under construction (secret #2) is based on the Town's Interrogation Area where Strife begins, including its texturing. When you enter it, a message appears reading "Err... still not finished? .64 will obviously take forever!" At the time this part of the WAD was built, Marisa Heit (Randi) was working on implementing Strife support in ZDoom. It was slated for version 2.0.64 (released June 8, 2004), but ultimately implemented in version 2.0.90 (released October 10, 2004).