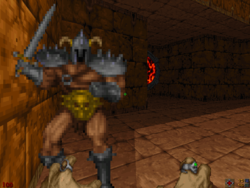 Zedek attacking the player in his tomb

Zedek is the leader of the Legion and one of three bosses on Hexen's last hub, the Necropolis, and uses the Fighter's sprites. Zedek now serves Korax as an unliving warrior. Like the other class bosses, he can be fought at any time in the Necropolis. According to the manual:

"Once the leader of the Legion, Zedek is now little more than a pawn in the hands of the Serpent Riders. Still, he retains all his old martial skills, and defeating him will be one of your greatest challenges."
― Hexen instruction manual

Zedek uses the Quietus, which is easier to evade than the other classes' ultimate weapons, but it is still deadly if the full blast connects, so it is best to avoid getting too close. In his level, Zedek's Tomb, players can actually run towards the end wall inside the room in which Zedek awaits them, and then turn around to perform the first strike on him once his pedestal completely rises up, which is helpful for making a quick kill. Like the other class bosses, Menelkir and Traductus, Zedek will move in erratic strafe-like patterns as he fights, making him harder to hit. Zedek has 800 hit points in single player, but quintuples this amount during a cooperative multiplayer game to a massive 4000 points, regardless of the number of players in the game.