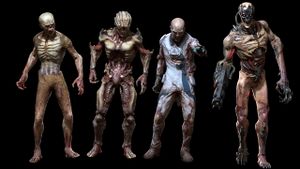 Zombies are a returning enemy type in Doom Eternal. They resemble traditional zombies more than their Doom (2016) counterparts.

Like the possessed scientists before them, zombies are sluggish, have low health, and are restricted to weak melee attacks. They should be chiefly considered as targets for glory kills, the flame belch or the chainsaw, depending on the player's current need for health, armor, and ammo respectively.

Humans that are corrupted into serving Hell lose their humanity, giving up their souls in return for promises of power. What is left is a mockery of their former selves.